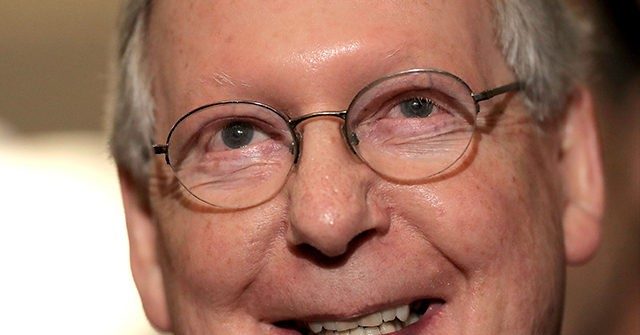 Senate Majority Leader Mitch McConnell (R-KY) has been known to delight in the teasing, mocking, and trolling, of his political adversaries. It’s also apparent that McConnell’s mockery does not take national holidays off.

In his Independence Day tweet, the Senate’s top Republican chose to wish Americans a happy 4th of July, while simultaneously trolling Colin Kaepernick and Nike with the Betsy Ross flag.

This isn’t the first time McConnell has sounded off on the Kaepernick/Betsy Ross/Nike saga. Earlier in the week, the Kentucky Republican appealed to Nike to reverse course and release the patriotic sneakers. Moreover, McConnell said that if the shoe giant did put the Betsy Ross sneakers back on the shelves, he’d “make the first order.”

“If we’re in a political environment where the American flag has become controversial to Americans, I think we’ve got a problem,” McConnell said.

“I hope Nike either releases these shoes or some other shoe maker picks up the flag, puts it on a pair of shoes and starts selling it. I’ll make the first order.”

Despite McConnell’s noted trolling abilities, Nike has given no indication of changing their minds on the issue.