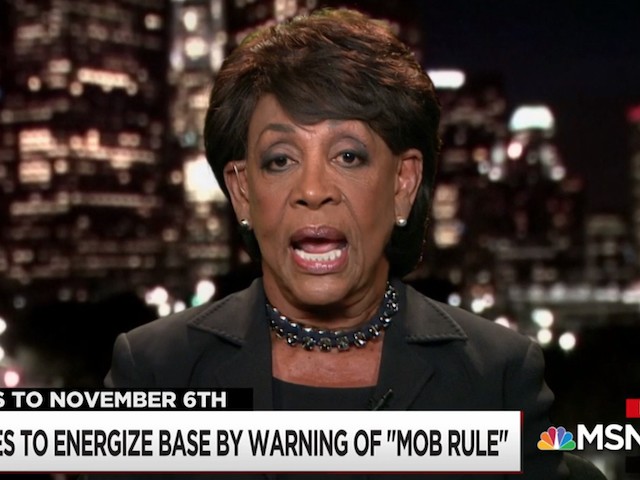 Tuesday on MSNBC’s “All In,” Rep. Maxine Waters (D-CA) said President Donald Trump was a “poster boy for what a mob protester looks like.”

Discussing conservative media calling protests a “mob,” Waters said, “Well, I think it’s absolutely ridiculous. It’s not believable. As a matter of fact, this country was built on peaceful protests. And those of us who were part of the Civil Rights movement, who understood the power of protest taught by Dr. Martin Luther King and others know that we cannot allow Donald Trump and anybody else to take protests away from us and to deem it to be violent and to try and make us look like a mob. It is because of peaceful protests, not only in the Civil Rights movement, but the labor movement was able to get better wages, able to get better working conditions, able to get better pay, everything because they learned to march and protest. And they still do it today. We know that protest is guaranteed to a democratic society. We know that this is guaranteed to us by the Constitution.”

She continued, “They’re trying to change the description of protest and call it a mob. Well, this president is the poster boy for what a mob protester looks like. He is—matter of fact, he’s the one who has been violent in his speech. He’s the one in his rallies has said things like ‘I’d like to punch him in the face.’ Trump said that at one of his rallies, he said ‘knock the crap out of them, would you, and seriously, okay, just knock the hell out of them, I mean, I promise I will pay the legal fees.’ That’s the kind of talk that he has done. That’s violent talk. With don’t have that kind of talk that has come from the women who are protesting. As a matter of fact, this country is past due for the kind of protests that we have seen women do in the last few days as we have gone through this confirmation process of Kavanaugh. It is time for women to say that we’re tired of being disrespected.”