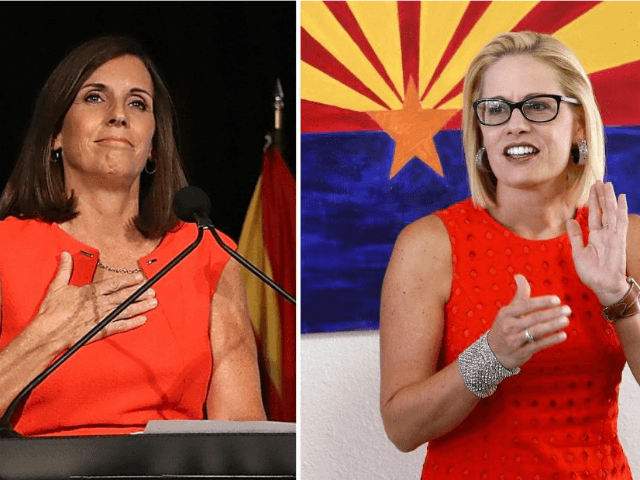 McSally garnered 48 percent support to Sinema’s 46, a surge for McSally from a prior poll, but still a statistical tie with a four percent margin of error. The New York Times/Siena College survey of 606 Arizona voters conducted October 15-19 showed McSally with the two point lead, contrasted with an October 16-17 Data Orbital poll that showed Sinema up seven.

Six percent of respondents in the NYT/Siena poll were undecided between McSally and Sinema.

Forty-eight percent of respondents approved of the job President Donald Trump is doing compared to 46 percent who didn’t. Fifty-one percent wanted to see Republicans retain control of the U.S. Senate.

President Trump rallied Arizonans Friday night at a Mesa Gateway airport hanger where thousands of people flooded the venue – not just inside, but flowing outside as the inside hit capacity. Enthusiastic crowds outside the venue watched the rally on a big screen.

At one point during Trump’s Friday Mesa rally the crowd began chanting, “build that wall.”

Several videos have surfaced in recent weeks of Sinema making derogatory comments about Arizonans, stay-at-home moms, and Republicans. She has called Arizonans crazy repeatedly, belittled stay-at-home moms as leeching off their husbands, and in a radio interview from 2003 declared she did not care if Americans went to fight for the Taliban.