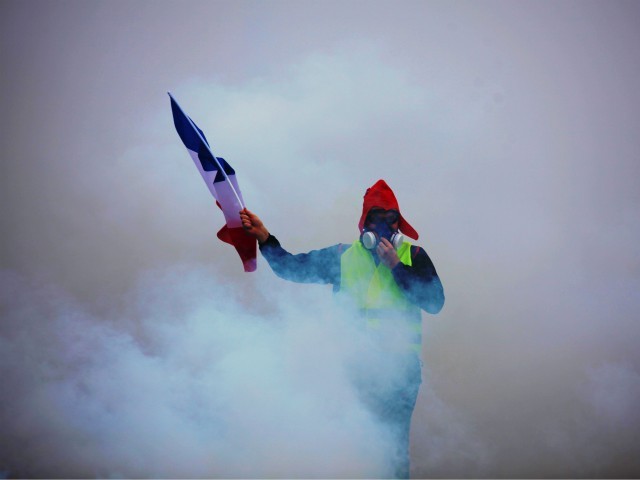 An 80-year-old woman has died after she was hit in the face with tear gas grenade pellets during Yellow Vest protests in Marseille, France.

The woman, of Algerian heritage, was home in her fourth-floor flat in a building near La Canebière, Marseille, Southern France, when she was hit Saturday, reports Le Parisien.

It is believed the octogenarian was closing the shutters of her apartment to guard her against the smoke of tear gas when the projectiles struck her in the face, her apartment not far from where demonstrations were taking place.

The victim’s friend Salim Moussa, a lawyer who lives in the building opposite, described her as “frail” and said, “The lady was closing her shutters to avoid the fumes of tear gas and received one in the face.”

Marseille public prosecutor Xavier Tarabeux confirmed Monday that the victim was taken to the Timone Hospital and then to the Conception Hospital, where she was operated on but died of “operational shock” on Sunday.

“We found at her home grenade pellets,” Mr Tarabeux said, but added that “at this stage, we can not establish a causal link between the injury and the death.”

An autopsy will be performed Monday.

Three separate groups were believed to have been protesting in the Old Port area of the southern French city, one of which was the Yellow Vests, all believed to be marching against substandard housing.

Yellow Vests, or Gilets Jaunes, have been protesting on the streets of Paris and the rest of France every weekend for the past three weeks against President Emmanuel Macron’s climate-change inspired fuel tax hikes and against the cost of living.

On Sunday, President Macron surveyed the vandalism on the Avenue des Champs-Élysées resulting from riots and violence the day before, with his cabinet considering a state of emergency across the country.

Other groups have used the momentum of the Yellow Jacket movement to vent their frustration at the progressive leader’s reforms, with ambulance drivers blocking the Place de la Concorde near the National Assembly in downtown Paris and student protests closing 100 schools across the country on Monday.