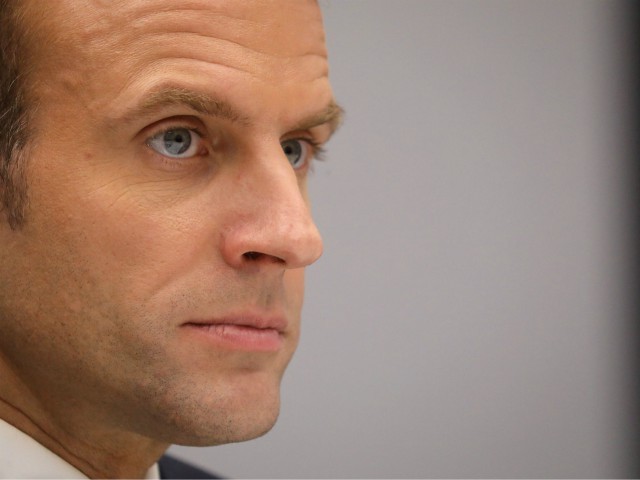 One reason this dime store Napoleon has it coming is outlined in a characteristically incisive piece by Dominic Lawson in the Mail. It’s headlined: “Why It’s Hard Not to Gloat at the Travails of the Strutting French President Who Called Brexiteers Liars.”

Lawson points out that of all the European leaders, no one has gone further out of his way to try to shaft Britain’s Brexit prospects than the pint-sized Mummy’s Boy Macron.

He has, more than any other European leader, expressed his own political vision as a direct rebuke to the idea of national self-assertion (making him a hero to British anti Brexit campaigners).

At the Salzburg EU summit in September, Macron denounced the British politicians behind Brexit as ‘liars’ — a most unusual intervention in a gathering where leaders are not meant to take sides in the debates of neighbouring countries.

But the main reason he deserves to lose this one — and lose horribly — is that the protests in France are an entirely self-inflicted disaster, the product of Macron’s suicidal decision to embrace the globalist cause of green lunacy just as it has begun to fall out of fashion.

The Gilets Jaunes (Yellow Vest) protests are a perfect example of how the tide of public opinion is turning on green policy.

Yes, there are other reasons too: resentment at the tax cuts Macron has offered the super-rich in order to lure them to France; the fact that permanent revolt is the natural state for all Frenchmen…

But the main one is the 23 per cent hike in the price of diesel which Macron has inflicted on motorists. And to which he has then added insult to injury by telling them in a classic “Let them eat cake” moment, that it’s all OK — they can just use public transport instead.

Yeah, that’s just the way to appease all those drivers in rural France — where anti-Macron, anti-EU, anti-green sentiment is strongest: tell them that, for the good of the environment, they should accept not being able to use their own cars and vans and lorries.

Rupert Darwall has the dirt:

But when it comes to the higher fuel taxes that sparked the gilets jaunes protests, all the proceeds – €5bn this year, €7-8bn next – are being used to subsidise wind and solar energy, which in turn means higher energy prices. Higher taxes, higher electricity costs, worsened business competitiveness is Macron’s triple whammy for nil social benefit.

This was an entirely unforced error on Macron’s part. Of all the countries in Europe, France can lay claim to the title of the “greenest” or most “global-warming-friendly” because of the happy historical accident that it has so much nuclear power. Though greens generally hate nuclear power it is by far the most carbon-neutral. France has lots of it because of a policy introduced in the Georges Pompidou era and embraced by Valery Giscard d’Estaing whereby France would demonstrate its technological prowess while simultaneously freeing itself from vulnerability to OPEC-induced oil shocks.

And now, in order to kowtow to the kind of rabid green ideologues who’d probably hate him anyway regardless of what he does, Macron has chosen to indulge the eco-loons’ anti-growth, junk-science-fuelled renewable energy nonsense at the expense both of his economy and of popular support from the electorate.

Under Macron, France now looks in serious danger of squandering all its energy advantages in order to imitate the kind of renewable energy policies which have proved such a disaster in Germany.

At present, France is the efficient part of the European electricity market and Germany the inefficient part. At a cost of hundreds of billions of euros, Germany’s Energiewende has seen Germany turn into Europe’s largest energy exporter, dumping its low grade, surplus electricity on its neighbours, sometimes even paying them to take it when too much wind and sun turn wholesale prices negative. In ten years, German electricity exports more than doubled from 20 Terrawatt hours in 2006 to over 50 TWh in 2016 compared to some 37TWh of French electricity exports.

A study by two green think tanks in Germany and France argued that France can’t accommodate the growth of wind and solar unless it shrunk its nuclear fleet, a vivid demonstration of the Pretzel Effect. Macron alluded to this in his speech. In talking of developing interconnections so that France and its neighbours can benefit from the lowest cost electricity, Macron committed the fundamental economic fallacy of confusing cost and value. The value of electricity depends on when it’s demanded. If lots of electricity is produced when it’s not wanted, its value plunges along with the price it fetches.

Tuesday’s speech sounds the death knell of France’s nuclear programme. Macron’s announced the closure of 14 nuclear reactors between now and 2035. New nuclear power stations after the troubled Flamanville project would have to be price competitive. The problem, as shown by the premature closure of nuclear plants in the US, is having large amounts wind and solar destroy the economics of nuclear – transferring the inefficiency of wind and solar makes nuclear less efficient, raising the price at which it can break even. Nuclear doesn’t make for a good pretzel.

Macron is a very, very silly boy. He will pay a terrible price for his foolishness.