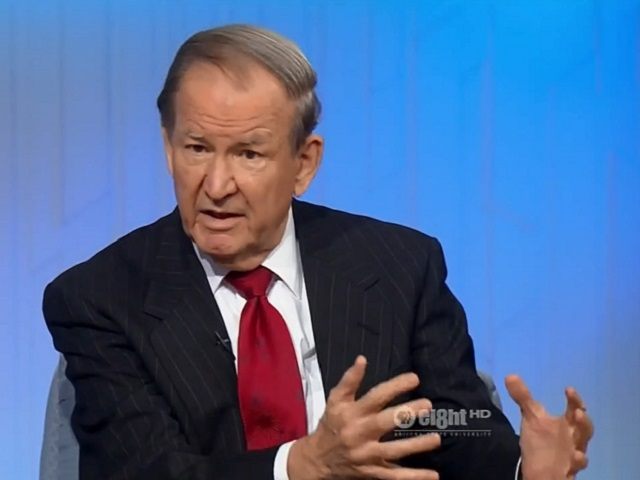 Populist conservative author and columnist Pat Buchanan says the migrant caravan of more than 4,000 Honduran and Central American nationals is President Trump’s chance to demonstrate that he can stop the “third world invasion of the West.”

During an interview with Raymond Arroyo on the Laura Ingraham Show, Buchanan said the migrant caravan headed to the U.S.-Mexico border is an opportunity for Trump ahead of the 2018 midterm elections to show that he has the willpower to stop mass immigration at America’s borders.

The folks from the south who are dealing with repression and war and poverty and hardships all want to come north to Europe and the United States. And it enables Donald Trump to demonstrate he’s a leader on this issue, this is his issue. And he can take action to secure the borders and prevent what is really a third world invasion of the West. [Emphasis added]

Though members of the migrant caravan have been portrayed by the establishment media as “asylum-seekers,” a number of migrants interviewed have admitted that they are looking for jobs, not asylum.

As Breitbart News‘s Neil Munro reported, migrants with the caravan profiled by the New York Times and the Associated Press have all noted that their main goal once arriving in the U.S. is looking for a job — which is not an eligible claim for asylum.

This week, Breitbart Texas reported that the migrant caravan has stormed through Mexico, tearing down a border barrier in the process as they cross from Guatemala to Mexico.