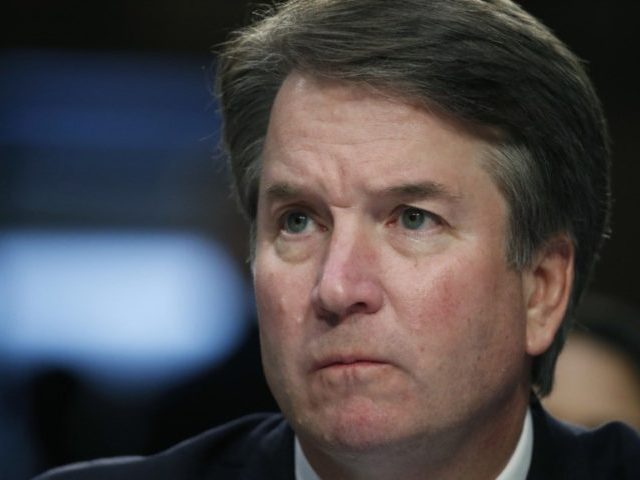 “Thank you for the invitation to appear before the Senate Committee on the Judiciary on Monday, September 24. I will be there. I look forward to the opportunity to testify before the Committee,” the Supreme Court nominee wrote. (Emphasis added.)

The letter comes hours after Ford, who accuses Kavanaugh of drunkenly groping, restraining, and attempting to undress her at a high school party more than 35 years ago, communicated through her lawyers that she was not willing to appear at the open hearing under oath Monday.

Ford’s lawyers made clear she was “willing to testify” but that it was “not possible” for her to do so Monday. Grassley previously offered the opportunity for Ford to address the committee behind closed doors at a bi-partisan conference and other Republican committee members reiterated Wednesday that Ford is still welcome to testify privately.

By contrast, Kavanaugh expressed eagerness to defend himself further after having already done so to Judiciary Committee staff behind closed doors and stated he was willing to conduct the additional hearing as early as this past Tuesday. “I also appreciate the time that Committee staff took to interview me on Monday, September 17. During that interview, I twice requested a Committee hearing for the following day, Tuesday, September 18,” Kavanaugh goes on. “I continue to want a hearing as soon as possible, so that I can clear my name.”

Kavanaugh closes the letter with another denial of Ford’s claims. “Since the moment I first heard this allegation, I have categorically and unequivocally denied it. I remain committed to defending my integrity,” his letter reads.

The Monday hearing already represents a delay to Kavanaugh’s confirmation process. He had been scheduled to come up for a committee vote this Thursday, the last hurdle before a final full-Senate debate and vote, when Ford’s allegations surfaced over the weekend. During his four days of public hearings, no mention was made of the alleged incident despite ranking Democrat Dianne Feinstein (D-CA) having been in possession of a letter from Ford detailing her account for weeks.

Democrats, including Feinstein, are now claiming the Monday hearing is too soon and that the FBI needs to investigate the allegation first:

This is exactly right. The FBI should investigate Dr. Ford’s allegations, not partisan staff. Senators need to be working with the same set of facts. https://t.co/Vv4TDqMA7I

Other Democrats on the Senate Judiciary Committee have called the Monday hearing a “rush”:

Republican opposition to re-opening the FBI background investigation doesn’t make sense. Members of the U.S. Senate should exercise due diligence, not rush toward a vote for a lifetime appointment. The people we represent didn’t send us here to shirk our duty.

Sen. Patrick Leahy, a senior Democrat on the judiciary committee, says Republicans should not rush Christine Blasey Ford to testify: “If they have nothing to hide, why the hurry?” pic.twitter.com/0afCwzv7VG

The Justice Department has repeatedly explained that, as the allegations contain no possible federal crime and the FBI’s nominee background investigations do not include the Bureau weighing in on the credibility of claims of this kind, the FBI is not involved in the dispute.