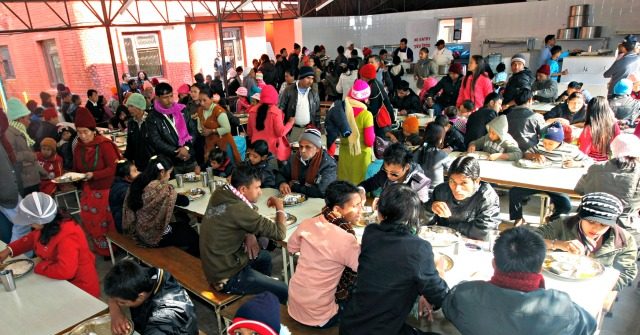 Joe Biden wants to import at least 125,000 refugees next year, so offering a huge inflow of cheap disposable labor to meatpackers, farm companies, retailers, and other low-wage, low-tech employers.

Biden told NBC June 27 that if he is elected President, he would start by:

Restoring refugee admission in line with the values and historic leadership of our country, raising the target to a minimum of 125,000 people a year in my first year. [President Donald Trump] has cut it down to 15[000], the average has been 95,000 a year. Working with Congress to establish bipartisan legislation to ensure a minimum admission of 95,000 refugees.

Biden justified his proposed inflow of cheap labor by saying the United States accepted immigrants for the low-tech 1800s economy:

That’s who we are. That’s how my great-great-grandfather … got in [an unsafe] “coffin ship” in the Irish sea, never knowing whether he was going to make it and he made it to the United States of America in 1848.

From 2017 to 2019, Trump helped raise wages and working conditions for blue-collar Americans and legal immigrants by sharply reducing the flow of unskilled, cheap labor via the refugee programs.

Low-wage employers complained bitterly about Trump’s cutoff of the cheap refugee labor — and so did the Democrat-run “VOLAGs” groups which are paid to deliver refugees to the meatpackers and other companies around the United States. In February, for example, the Wall Street Journal complained that “corporate profits have been declining as employers increase wages to hire scarce blue-collar workers.”

In April 2020, the New York Times described one impact of the low-tech, low-wage migration favored by Biden:

For more than 100 years, people fleeing war zones and abject poverty have put in long hours at the eight-story plant that churns 24 hours a day alongside the tree-lined Big Sioux River. They worked side by side in front of speeding conveyor belts and behind vibrating electric knives powerful enough to slice through a hog every 30 to 40 seconds. Many iced their wrists at night and relied on a daily dose of ibuprofen to keep up with the work of slaughtering, processing and packaging pork products for global consumption.

For many of the workers, risk is nothing new. They fled war, food insecurity or ethnic persecution to reach the United States. Though they have seen colleagues crushed by fast-moving machinery, toppled by greasy floors and burned by powerful cleaning agents, many say they consider the job a privilege.

“I can’t wait to go back to work for the simple reason that this is the only thing that supports my family,” said Achut Deng, a Sudanese refugee who in six years worked her way up from a “wizard knife” operator paid $12.75 an hour to a shift lead making $18.70. “I do feel sorry for everyone who is going through this, I feel sorry for myself, but it’s like, I feel better now so I’d rather go back to work.”

In Europe, companies are forced to pay higher wages, so they invest in cleaner, labor-saving machinery.

Costco built a highly automated meatpacking plant in which two shifts of roughly 400 employees will produce two million chickens per day, mostly for West Coast customers of Costco’s $4.99 roasted chicken. “The technology has enabled us to do a lot of things — use fewer people, and eliminate the harder jobs — and it has taken away some of the dissatisfaction that people have seen in [meatpacking] jobs,” said Jessica Kolterman, spokeswoman for Costco’s Lincoln Premium Poultry subsidiary.

The technology allows the workers to daily process 2,500 chickens per worker, easily allowing a starting wage of $15 an hour, plus health care and vacation benefits. Costco bought much of the production technology from Marel, a firm in low-population, high-wage Iceland where engineers had to develop labor-saving machines to strip the expensive meat from fish and poultry.

“We have have been officially declared as having the worst outbreak of Covid-19 case in the entire state,” Chelsea City Councilor Judith Garcia told Rebel Radio April 10. “A lot of the folks are undocumented,” she said:

“We are a 1.8 mile-square city [in Boston]. We’re the second to third densest city in the state … We have working families that are living in apartments with up to sometimes 15 people in a three-bedroom apartment. On top of that, we have families that in the best economic times have two to three jobs just to make ends meet. A lot of those jobs are … virtually gone …

Our rates of infection are higher than in New York City … It is horrible storm and we need as much help as we can.”

The same cheap labor supply has transformed many towns in rural America, as factory owners ally with retailers, landowners, and local politicians to sideline local Americans.  A 2017 report on Denison, Iowa, by Harvest Public Media, sketched the impact of cheap, migrant — and often illegal — labor:

Today, the Latino community is well-entrenched, with many small business owners, a Spanish-language newspaper, and Latino officers on the police force. … many people still make their way here from Latin America. They’re fleeing poverty, gang violence or persecution, as generations of immigrants have done throughout history and around the world.

These arrivals from Mexico and Central America land here alongside [legal] refugees from Africa and Asia. In particular in Denison, they often come from South Sudan and Burma (now known as Myanmar). The long, hard hours of meatpacking work attract newcomers because it doesn’t require much English and brings in a steady paycheck.

The inflow of migrants has imposed a high cost on the employees in the town — for example, by minimizing wage raises in the town’s six meatpacking plants and by exacerbating civic inequality. Roughly 60 percent of the kids in the local high school are eligible for free lunches, partly because 50 percent of families in the town earn less than $50,000, versus $63,000 nationally.

The inflow also changed the K–12 school system needed by the Americans’ kids. More than half of the town’s K–12 kids are learning English as a second language, according to Iowa Public Radio.

On Day One, I’m going to send the legislation for an immigration reform bill to Congress to provide a roadmap to citizenship for 11 million undocumented immigrants who contribute so much to this country, including 1.7 million [Asian American and Pacific Island people].

Ending Trump’s cruel, inhumane policy at the border to rip children from their mothers’ arms. Take immediate action to protect [younger illegals] Dreamers — including the more than 100,000 eligible Dreamers from East and South Asia. Rescinding the un-American Muslim ban immediately. Restoring refugee admission in line with the values and historic leadership of our country, raising the target to a minimum of 125,000 people a year in my first year. He’s cut it down to 15[000], the average has been 95,000 a year. Working with Congress to establish bipartisan legislation to ensure a minimum admission of 95,000 refugees. That’s who we are. …

So streaming, streamlining the naturalization process. Make it easier for qualified green card holders to move through his backlog … He ended H1B visas the rest of this year. That will not be in my administration. The people coming on these visas have built this country, and so you ask the other parts of a question, I can’t remember what the other ones were. One was what I’m going to do about immigration, what was the other part? Was that it?