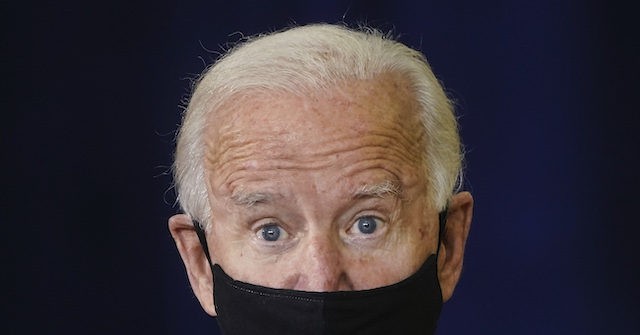 Former Vice President Joe Biden told a Wisconsin reporter Tuesday evening that there is “no basis” for the accusation that his son, Hunter Biden, profited from foreign business partners by selling access to his father during his tenure in office.

Adrienne Pedersen of Milwaukee ABC affiliate WISN 12 News’ interviewed Biden, who was at his home in Delaware after “calling a lid” for several days leading up to Thursday’s final presidential debate.

Pedersen asked about the story, which is based on the release of emails purportedly from Hunter Biden’s abandoned laptop, as well as emails from Bevan Cooney, a former business partner of Hunter Biden who is currently serving time in prison.

The emails provide evidence that Hunter Biden arranged a meeting between his father and an adviser to the corrupt Ukrainian energy company, Burisma. They also suggest Hunter Biden’s business partners arranged White House meetings for senior Chinese executives and officials.

Pedersen’s question was the last in the interview — and a Biden aide could be heard offscreen in the video, attempting to stop the interview before she asks it: “Adrienne, that’s all the time we have, I’m so sorry.”

Pedersen: Wisconsin’s Republican Senator Ron Johnson, put out a statement on Homeland Security letterhead saying Hunter Biden, together with other Biden family members, profited off the Biden name. Is there any legitimacy to Senator Johnson’s claims?

Biden: None whatsoever. This is the same garbage Rudy Giuliani, Trump’s henchman. It’s the last-ditch effort in this desperate campaign to smear me and my family. Even the man who served with him on that committee, the former nominee for the Republican Party, said there’s no basis to this, and you know, and all and the vast majority [sic] of the intelligence people have come out and said there’s no basis at all. Ron should be ashamed of himself.

The “former nominee” — Sen. Mitt Romney (R-UT), whose name Biden has forgotten before — criticized Johnson’s probe in September, but was not reacting to the recent revelations about Hunter Biden’s emails. (One of Romney’s former advisers sits on Burisma’s board.)

As for the “vast majority of the intelligence people,” over 50 former intelligence officials, led by Obama-era figures James Clapper and John Brennan, released a letter Tuesday claiming that the emails looked like they could be “Russian disinformation.”

Clapper and Brennan — who were leading figures in pushing the Russia collusion hoax against President Donald Trump — admitted that they “do not have evidence” of Russian involvement.

They did not say “there’s no basis at all” for the allegations; rather, they admitted that the emails could indeed be “genuine.”