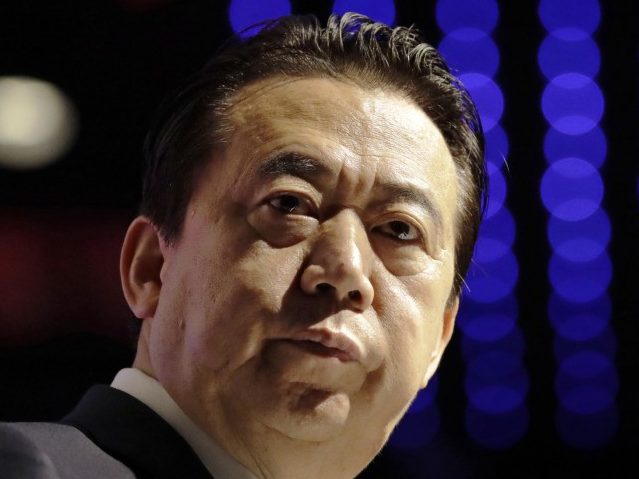 Interpol issued an official statement on Sunday confirming they had received the resignation of President Meng Hongwei shortly after the Chinese government admitted to abducting Meng, imprisoning him for allegedly taking bribes and other corrupt acts.

Meng left France, where he lives, to visit family in China in late September. Wife Grace Meng said at a press conference Sunday that her husband texted her “wait for my call” shortly before disappearing, following by a knife emoji she interpreted to be a warning that he was in danger.

The New York Times notes that China often uses vague corruption charges to detain and disappear internal opponents to Communist Party chief Xi Jinping. “The central commission can detain party officials for months or years while carrying out an investigation,” the Times details. “The commission often concludes an investigation by stripping an official of party membership, stating the official’s violations of party regulations and referring the official to the justice system for criminal prosecution.”

French police confirmed on Friday that Meng disappeared after leaving France; Chinese authorities did not issue any clarifications at the time.

Statement by the INTERPOL General Secretariat on the resignation of
Meng Hongwei. pic.twitter.com/c2daKd9N39

The newly minted acting president told the Associated Press Monday that Interpol is still largely in the dark about what the Chinese communist regime has done to Meng.

“I find it regrettable that the top leader of the organisation had to go out this way and that we weren’t specifically notified of what was happening in advance,” Kim said. “We still don’t have sufficient information about what’s happening [with Meng] or whether it has anything to do with Chinese domestic politics.”

The Chinese Ministry of Public Security issued a statement Monday that did not state Meng’s current location but did take responsibility for his disappearance. Instead, the statement condemned Meng personally, asserting that his “insistence on doing things in his own way means he has only himself to blame for being placed under investigation.”

“There is no place for any negotiation or bargaining with the party,” the statement read.

The Communist National Supervisory Commission (NSC) is in charge of the case, the statement further added. It did not provide any details on the charges against Meng or when he allegedly committed the crimes in question.

Lu insisted that the sudden arrest and lack of transparency in Meng’s abduction was proof that China respected the rule of law.

“The press release about the Party Committee meeting of the Ministry of Public Security issued by the Ministry’s website has made it very clear that this case fully testifies to the clear attitude and firm determination of the Party Central Committee with Comrade Xi Jinping at the core to strengthen Party discipline and see the anti-corruption campaign through,” Lu said. “It also specifically mentioned that there is no privilege or exception before the law. Anyone who violates the law will be held accountable and severely punished.”

Meng spent decades working in Chinese law enforcement before his Interpol appointment, reaching the title of vice minister for public security. Interpol named him the first Chinese president of the organization in 2016, triggering international human rights concerns given the authoritarian and often arbitrary way the Chinese Communist Party wields power against political dissidents at home.

Rather than cooperation with the Chinese communist regime, Meng’s tenure at the head of Interpol was defined by resistance to Beijing’s attempts at abusing the Interpol system to persecute dissidents abroad. In February, Interpol announced that it would cancel a “red alert” notice China had requested against Dolkun Isa, the head of the World Uyghur Congress, a group advocating for the human rights of ethnic Chinese Uighurs. The Chinese government filed for the alert arguing that Isa was a “terrorist,” a claim Meng’s Interpol dismissed as unsubstantiated. On the contrary, Beijing has increasingly used repressive tactics to silence and erase Uighurs from the cultural fabric of the country, a systematic campaign Isa’s group seeks to raise awareness of.

In Xinjiang, home to the majority of China’s Uighur population, Beijing has established “political re-education camps” where Uighurs are forced to abandon Islam, learn Mandarin, and pledge allegiance to Xi Jinping, reportedly under threat of torture.