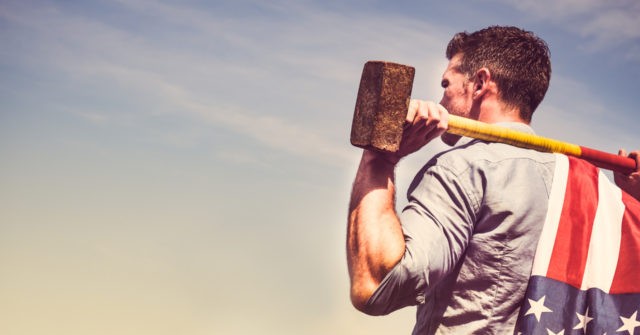 Things are looking up for the construction industry.

Homebuilder confidence rose one point to a score of 84 in February, the National Association of Home Builders said Wednesday. Economists surveyed by Econoday had predicted the measure to remain flat with January’s 83.

Anything above 50 is considered positive sentiment.

A year ago the index was at 74. It dropped during the initial lockdowns after the pandemic struck but has soared higher as demand for single family homes has skyrocketed.
Buyers are seeking out a respite from increasingly violent and deadly cities, where murders and shootings have exploded higher. Gun murders were up 31 percent in the United States in 2020. New York City, for example, finished 2020 with a 14-year high in shootings and a 40 percent increase in murders from the year before. This summer, New York and other cities were beset by riots, looting, and left-wing mobs demanding the defunding of police departments.

Schools and workplaces have also been shut down so that family members are working and learning from home. This puts a premium on space, feeding into demand for larger houses. Many people who once commuted five days a week expect to work only part-time from the office once the virus is contained.

As well, many of the amenities—museums, theaters, restaurants, nightlife, sports—that made living in city centers attractive have been closed or highly restricted for nearly a year. Very low mortgage rates have helped keep homes affordable despite rising prices.

Extremely low levels of existing homes for sale is pushing demand into the market for new homes, which is around 12 percent of the overall housing market.

The component of the index that tracks traffic of prospective buyers increased four points to 72. The index of expectations for future sales over the next six months fell by three points to 80, while the current sales activity metric held steady.

Builder confidence in the Northeast saw a huge jump from 68 in January to 89 in February.

“Demand conditions remain solid due to demographics, low mortgage rates and the suburban shift to lower cost markets, but we expect to see some cooling in growth rates for residential construction in 2021 due to cost factors, supply chain issues and regulatory risks,” said NAHB Chief Economist Robert Dietz. “Some builders are at capacity and may not be able to expand production due to these headwinds.”