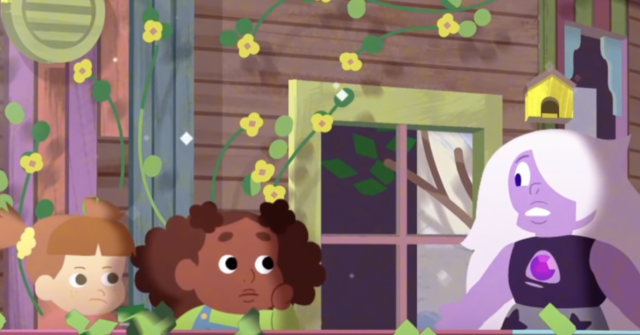 Cartoon Network has released an “antiracism” public service announcement teaching children to “see color,” suggesting that having a “colorblind” approach to race could be “a ploy to avoid talking about racism altogether.”

The network’s latest antiracism ad, titled, “See Color,” features three characters — one black, one white, and one purple alien — on set filming a PSA, singing, “colorblindness is our game, because everyone’s the same. Everybody join our circle, doesn’t matter if you’re white, or black, or purple.”

“Hold up a minute here, who wrote this?” says the purple alien, stopping the song. “I think it kind of does matter that I’m purple. I mean, I’m purple because I’m literally an alien.”

“Well I’m not an alien, but it definitely matters to me that I’m black,” says the black character.

“Yeah, it makes a difference that I’m white,” the white character adds. “I know the two of us get treated very differently.”

“I think it’s just messed up to compare me being an alien to you two being difference races, you’re both human, you’re totally biologically the same,” the alien elaborates. “Adding ‘purple people’ into a lesson about human racism makes no sense.”

The white character reacts by stating that she believes people use the “black, white or purple” phrase, “because adding a fantasy race in there helps distract from the actual racism black people have to deal with.”

“Right,” the black character replies. “My experience with anti-black racism, it’s really specific. Other people of color experience other forms of racism, too. But you won’t see any of that if you don’t see color.”

The ad concludes with the purple alien stating that the PSA could be “a ploy to avoid talking about racism,” and asking the production team to rewrite the script so that it doesn’t “erase” what makes people different.

“So this entire public service announcement could be a ploy to avoid talking about racism altogether,” the alien says. “Hey, could we get a rewrite where we appreciate each other without erasing what makes each of us different?”

In October, Cartoon Network began their “antiracist” PSA series with “Don’t Deny It, Defy It” which featured two male cartoon characters — one white and one black — who discussed marrying each other someday.