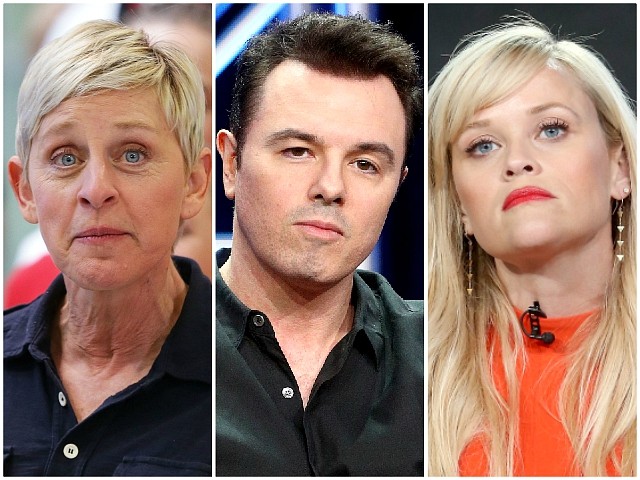 “Another gross day in the history of our country, but the midterms are coming. We are stronger than this bullshit. We can fight and fight and we may not see the results right away, but we will see them. Our daughters will see them. Don’t give up. Fight harder,” former Netflix host Chelsea Handler fumed on Twitter.

Another gross day in the history of our country, but the midterms are coming. We are stronger than this bullshit. We can fight and fight and we may not see the results right away, but we will see them. Our daughters will see them. Don’t give up. Fight harder.

Kavanaugh was confirmed Saturday — by a simple majority vote of 50-48 — after a contentious confirmation process that saw the longtime judge accused by multiple women of sexual misconduct.

It was, however, Sen. Susan Collins (R-ME)’s emotional speech on the Senate floor Friday that experts say sealed the deal for Judge Kavanaugh.

“This tweet is for Dr. Ford. You put yourself through so much and I want you to know it wasn’t in vain. You started a movement and we’ll see it through. If they won’t listen to our voices, then they’ll listen to our vote,” talk show host Ellen DeGeneres tweeted of Dr. Christine Blasey Ford who lodged a still-unsubstantiated claim that Brett Kavanaugh attempted to rape her in the 1980s when they were both in high school.

“In conclusion: People should be fucking terrified and outraged. I sure as hell am,” Actress Alyssa Milano tweeted, echoing many Hollywood celebrities’ sentiment that they can get “revenge” for Kavanaugh’s confirmation in next month’s election. “We need to take back our power by taking back the Senate and the House in November. It is the only way out of this mess.”

Below is a roundup of the Hollywood meltdown in reaction to today’s confirmation vote.

Even if Brett Kavanaugh is innocent — which I do not believe — ALL he had to do to bolster the appearance of judicial fitness was to keep his cool for just a few hours. Only a few hours of even-tempered composure. That’s it. He couldn’t. He is unfit for the sobriety of this job.

Real American heroism. Dr. Ford risked everything to tell the truth about this privileged Kavanaugh goon. Avenge her in November. https://t.co/NrLGWEXcRi pic.twitter.com/lSPtmVUH4I

Examining why I find it easier to articulate myself to an angry right wing man than I do speaking up to certain female friends.

On the unfair way Merrill Garland was treated, Susan Collins was silent.

Opinion: How the Democrats got outplayed on Kavanaughhttps://t.co/oQ7LCw2Ddu HOW LIMP R DEMS⁉️ WHERE DO THEY HIDE THEIRἼ🏈⁉️EVIL GOP CONG,SEX&🍺🍺SCOTUS,&🐈GRABBING PRES IS MARRIAGE MADE IN HELL🔥BUT GOP WILL BITE DOWN HARD ON DEMS,& NON WHITES JUGULAR’S,TILL THEY BLEED OUT

Moron, when you’re done taking credit for letting a man walk his daughter down the aisle you might want to consider you just gave legit conservative Republicans their 2nd Supreme Court seat & final thing they wanted from your incompetent ass. It’s gonna get real @realDonaldTrump https://t.co/rtGcIj4S92

My rage will not extinguish my hope, it will only organize it. #BelieveWomen #BelieveSurviviors pic.twitter.com/t94LR0V6Xf

I’m angry that the Senate will reward perjurer & misogynist Brett Kavanaugh with a lifetime appt to the Supreme Court. In an effort to flip this terrible Senate I’ve made this fund for Democrats in critical tossup races. Please give or give again: https://t.co/SimiGeUUEX

What a terrible day in American history.

Finally a privileged entitled white guy gets a win. I get that the majority of us a furious and sad but think about how great it’s gonna feel to vote every one of these victim shaming motherfuckers out! VOTE! Get your friends to vote! Volunteer! https://t.co/8Db5m4lLE7

An insult to survivors and a sad day for America pic.twitter.com/Y3pErrCGPf

I too am outraged at Kavanaugh’s confirmation. Take that rage, transform it into action. If you are 18-25 we NEED you to REGISTER and VOTE. We need to show up and show the world who we really are. Your rights depend on it.