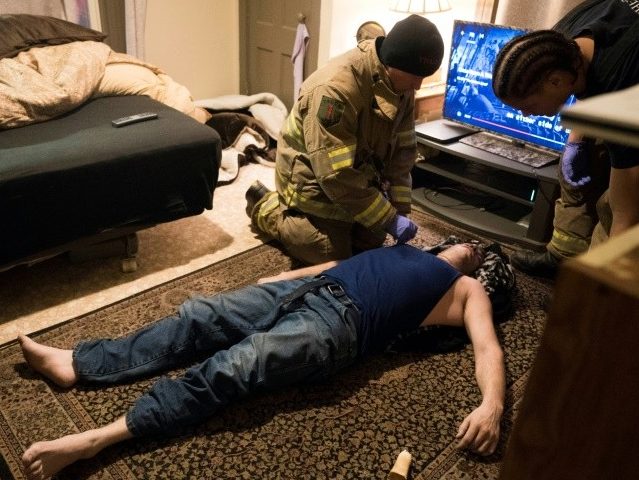 The left is shrieking about President Donald Trump committing “war crimes” at the border by using tear gas to disperse a mob of violent migrants, while the media try very hard to keep anyone from remembering the sainted Barack Obama repeatedly did the same thing. All of these hysterics are curiously silent about the real chemical weapons attack perpetrated at the U.S. border: the fentanyl epidemic.

Fentanyl is a powerful and deadly synthetic drug often mixed with other street drugs to make them more potent. It is largely manufactured in China and pushed across the porous southern border into the United States by Central and South American gangs. It kills tens of thousands of Americans every year.

Fentanyl is incredibly dangerous because of its potency, the poor quality control of the labs that make it, its tendency to induce respiratory failure, and its resistance to the emergency antidotes carried by first responders. Its potency makes it highly portable and its ever-changing formula makes it difficult for law enforcement to detect.

The Centers for Disease Control counted 72,000 overdose deaths last year. Fentanyl is believed to have played a role in nearly half of them nationwide, with much higher percentages in hot spots like Massachusetts, New Hampshire, and Ohio. The CDC released a study in March that found fentanyl and similar synthetics are driving the increase in overdose deaths. The death rate from synthetics “more than doubled,” while overdose deaths from prescription opioids rose by 10.6 percent.

Media coverage and government policy for the opioid crisis is heavily focused on prescription drugs and their deep-pocketed, settlement-prone manufacturers and distributors, but the difference between a 10.6 percent increase in mortality rates and a surge of over 100 percent is stark. Fentanyl is by far the worst killer, followed by two other increasingly popular street drugs, cocaine and heroin, whose mortality rates increased by 52.4 percent and 19.5 percent respectively. Fentanyl passed other opioids as the most common cause of overdose deaths in 2016, and possibly even before that, since the exact type of drug involved in an OD is not always recorded on death certificates.

This is not just an American problem. Fentanyl was fingered as the primary culprit behind a 29 percent rise in overdose deaths in the United Kingdom last year. While fentanyl is seen as a relatively small part of the continental European illegal drug market, it still managed to kill at least 250 people there over the past two years, and there could be more uncounted deaths because European gangs have a habit of selling fentanyl disguised as prescription pain medication or heroin.

Fentanyl is so dangerous because it gets mixed into everything else by ambitious street dealers looking to juice up their products with a cheap and powerful additive. When a federal raid in October seized about 25 pounds of fentanyl from a drug ring in Lawrence, Massachusetts, U.S. Attorney Andrew Lelling remarked it was enough fentanyl to “kill half the state.” The Ohio Attorney General figured 20 pounds of fentanyl seized in June could have caused four million fatalities. When state troopers bagged 118 pounds of fentanyl in May, the U.S. Drug Enforcement Administration calculated it was enough to kill over 26 million people.

“Fentanyl has taken over as the drug that is killing people here. When we go to a death scene and you still see the needle in the arm, we know it was fentanyl because it works that quick,” Madison County coroner Stephen Nonn said on Monday of the record-setting carnage in St. Louis.

Fentanyl is held responsible for a stunning 95 percent of the overdose deaths in St. Louis. “There really is no pure heroin in St. Louis anymore,” Brandon Costerison of the National Council on Alcoholism and Drug Abuse remarked. “We don’t know if folks are intentionally knowing that this is adulterated, or if it’s a lack of quality control on dealers contaminating stimulants with a very, very potent opioid.”

Few militarized chemical weapons could claim to be more lethal, pound for pound, and none of them have been deployed against civilian populations on the scale of fentanyl. The worst chemical weapons attack in Syria killed 1,500 people at most. The chemical attacks that drew U.S. military action against the Syrian regime under President Trump killed several dozen civilians each. Fentanyl beats the Syrian dictatorship’s total nerve gas body count almost every week. A suitcase full of fentanyl is every bit as dangerous as the fabled “suitcase nukes” terrorists have thankfully failed to develop so far. Batches of heroin laced with too much fentanyl detonate like bombs and fill emergency rooms with corpses harvested from just a few city blocks.

“Even when you think you’re doing better, all it takes is one bad batch of fentanyl in any state and you’re going to have deaths,” Vermont health commissioner Mark Levine told the New York Times in August.

“The penetration of fentanyl into more heroin markets may explain recent increases in overdose deaths among older, urban black Americans; those who used heroin before the recent changes to the drug supply might be unprepared for the strength of the new mixtures,” the Times speculated, quoting experts who also feared a coming wave of deaths in the West from fentanyl mixed with black tar heroin.

Politicians and reporters paint the opioid crisis as a singular tragedy that began unfolding around the turn of the millennium, but addiction experts view it as three fairly distinct “waves,” beginning with a decade-long prescription drug abuse crisis that began subsiding in 2010, followed by a spike in heroin deaths until 2013, when fentanyl took over as the Grim Reaper. No one would argue that prescription opioids and heroin have ceased to be a problem, but fentanyl and its fellow synthetics are the big killers right now.

Daniel Horowitz at Conservative Review pictures the fentanyl crisis as a chemical weapons attack carried out by Chinese labs and drug cartel distributors against American civilians. He finds it no coincidence that the deadly third wave of the opioid crisis began after President Barack Obama’s “child migrant” surge of 2013-2015 swept gangs like MS-13 across the border and created the distribution network for fentanyl. He warns that loose immigration policy and prison reforms that could release a swarm of imprisoned dealers back onto the streets will only make the situation worse.

Is there a scrap of empirical evidence to prove this analysis wrong? On the contrary, skeptics keep catching government agencies manufacturing statistics to conceal the true lethality of imported street drugs and keep the focus on pharmaceuticals. Drug deaths are climbing despite enormous reductions in the prescription of opioids at the very painful expense of people who truly need them to combat chronic illness.

The spectacle of open-borders extremists portraying the use of tear gas to disperse riots at the border as “chemical warfare” is utterly grotesque when the real weapon of mass destruction is flowing north into American cities. Perhaps our friends on the left could take a moment away from their theatrical support of illegal aliens and spare a little of their vaunted compassion for the countless U.S. citizens murdered by fentanyl.