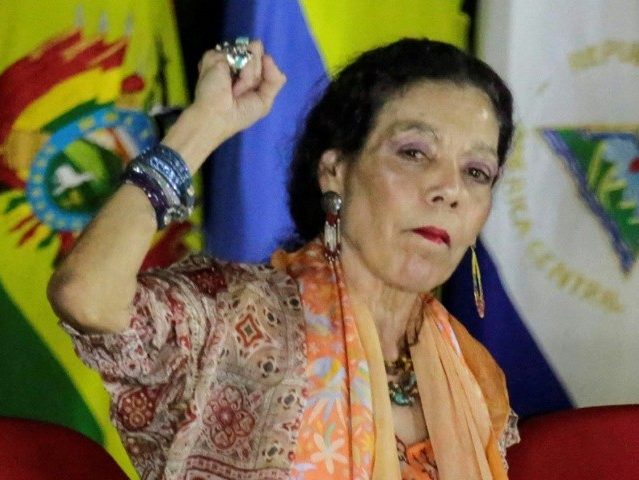 The United States sanctioned Nicaraguan First Lady and Vice President Rosario Murillo on Tuesday as part of a wider crackdown against the brutality of the Daniel Ortega’s socialist regime.

President Donald Trump signed an executive order titled “Blocking Property of Certain Persons Contributing to the Situation in Nicaragua,” that seeks to ban Americans and U.S. entities from dealing with Murillo and her security adviser Néstor Moncada Lau.

The U.S. accuses Murillo of overseeing a communist youth organization that has carried out extra-judicial killings, torture, and kidnapping, as well as corruption and wider human rights abuses. Lau is believed to have paid armed militias to attack protesters during the large-scale anti-government protests that took place this year. As well as banning Americans from doing business with them, the Treasury has frozen all their U.S.-based assets and transactions.

“Vice President Murillo and her political operators have systematically sought to dismantle democratic institutions and loot the wealth of Nicaragua to consolidate their grip on power,” said Treasury Secretary Steven Mnuchin in his department’s statement.

Murillo, who as well as being the First Lady also serves as the country’s Vice-President, is understood to be a key figure within the Ortega regime, which has unleashed a brutal crackdown on political dissidents following a widespread anti-government protest movement that broke out earlier this year.

In their efforts to contain protests, security forces have killed an estimated 300 people and wounded over 2,000 more. Authorities have also arrested thousands of anti-Ortega dissidents and, according to some reports, raped, beaten, and tortured them in a bid to coerce them into admitting they work for the United States and the CIA.

This month, Trump’s National Security Adviser John Bolton confirmed that the administration would impose additional sanctions against the regime. Speaking at the Freedom Tower in Miami, Bolton condemned the “three stooges of socialism” of Nicaragua, Venezuela, and Cuba, pointing out the threat they pose to regional stability.

In July, the Treasury Department placed sanctions on three top Nicaraguan officials over their alleged corruption human rights abuses, although the sanctioning of Murillo represents the boldest step yet.

“This Administration is committed to holding the Ortega regime accountable for the violent protests and widespread corruption that have led to the deaths of hundreds of innocent Nicaraguans and destroyed their economy,” Mnuchin explained. “The Treasury is intent on ensuring that Ortega Regime insiders are not able to access the U.S. financial system to profit at the expense of the Nicaraguan people.”