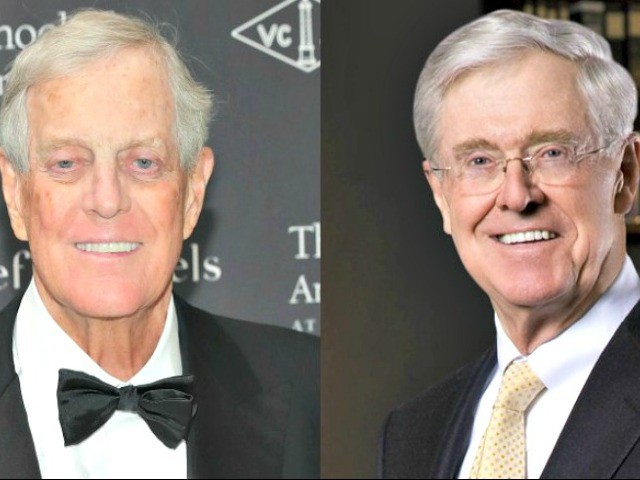 Despite their opposition to President Trump’s economic nationalist, “America First” agenda, the pro-mass immigration Koch brothers’ network of billionaire, donor class organizations has had continued access to the White House.

The billionaires Charles and David Koch and their donor-funded organizations such as Americans for Prosperity, the Libre Initiative, and Freedom Partners have opposed Trump’s patriotic immigration agenda for years.

The Kochs and their network have opposed any reductions to legal immigration to raise American workers’ wages; reforms to save U.S. taxpayers billions by ending welfare-dependent legal immigration; and an end to the country’s birthright citizenship policy that rewards illegal aliens’ U.S.-born children with American citizenship.

Instead, the Koch network supports mass illegal and legal immigration, as well as amnesty for the 12 to 22 million illegal aliens already living in the country.

Likewise, the Koch network and their donors announced that they would not financially back Trump in his 2020 re-election bid.

Nonetheless, the Koch network has kept their access to the White House, most recently having their spokesperson, Mark Holden, included in negotiations on immigration policy and border wall funds.

“Koch officials were back at the White House last week for a meeting on a potential immigration deal that could protect ‘dreamers’ in exchange for wall money, and they’re scheduled to return later this week,” the Post notes.

Over the weekend, the Koch network hosted more than 630 millionaire and billionaire donors who give hundreds of thousands to the network of organizations every year.

Due to the Kochs’ opposition to Trump’s populist-nationalist agenda, a data company with close ties to the Republican National Committee (RNC) will not renew a contract they previously had with the Koch groups.

“I don’t see a path where we have an agreement with them in the 2020 election cycle,” an official with the data company said of severing ties with the Kochs.

Since Trump reopened the federal government without securing border wall funds, a Senate conference committee has been formed to negotiate a deal. Insiders tell Breitbart News the Koch network will have some form of involvement in those negotiations, as well as officials from the White House like adviser Jared Kushner.