The scale of the deceit of Theresa May’s so-called “worst deal in history” deal has been dramatically revealed after the government was forced to publish a key legal document by a vote in Parliament.

Members of Parliament received the document Wednesday morning, and it was due to the published to the public around 11:30. Yet scanned pages of the paper quickly spread on social media as opposition politicians shared what they had received.

Controversially, the legal advice reveals that with Theresa May’s Brexit deal there would be regulatory and customs checks between Great Britain and Northern Ireland — in effect creating a border in the Irish sea between two equal and full parts of the United Kingdom.

This vote took #Brexit from the people and handed it to a #Remain Parliament. https://t.co/ROfWPj0FsJ

All parts of the United Kingdom being treated equally in negotiations and the status of Northern Ireland within the country not being challenged was a key “red line” of the government in Brexit negotiations, but the document clearly reveals that line has been crossed.

Explaining how the European Union will continue to set rules in Northern Ireland — an arrangement which deal critic and Brexiteer Boris Johnson has characterised as turning the British province into an “economic semi-colony of the EU” — the legal advice made clear how Ulster would be treated by the European Union.

It reads: “The arrangements as a whole apply differently in GB and NI… NO remains in the EU’s Customs Union, and will apply the whole of the EU’s customs [legislation], and the Commission and [European Court of Justice] will continue to have jurisdiction of its compliance with those rules”. 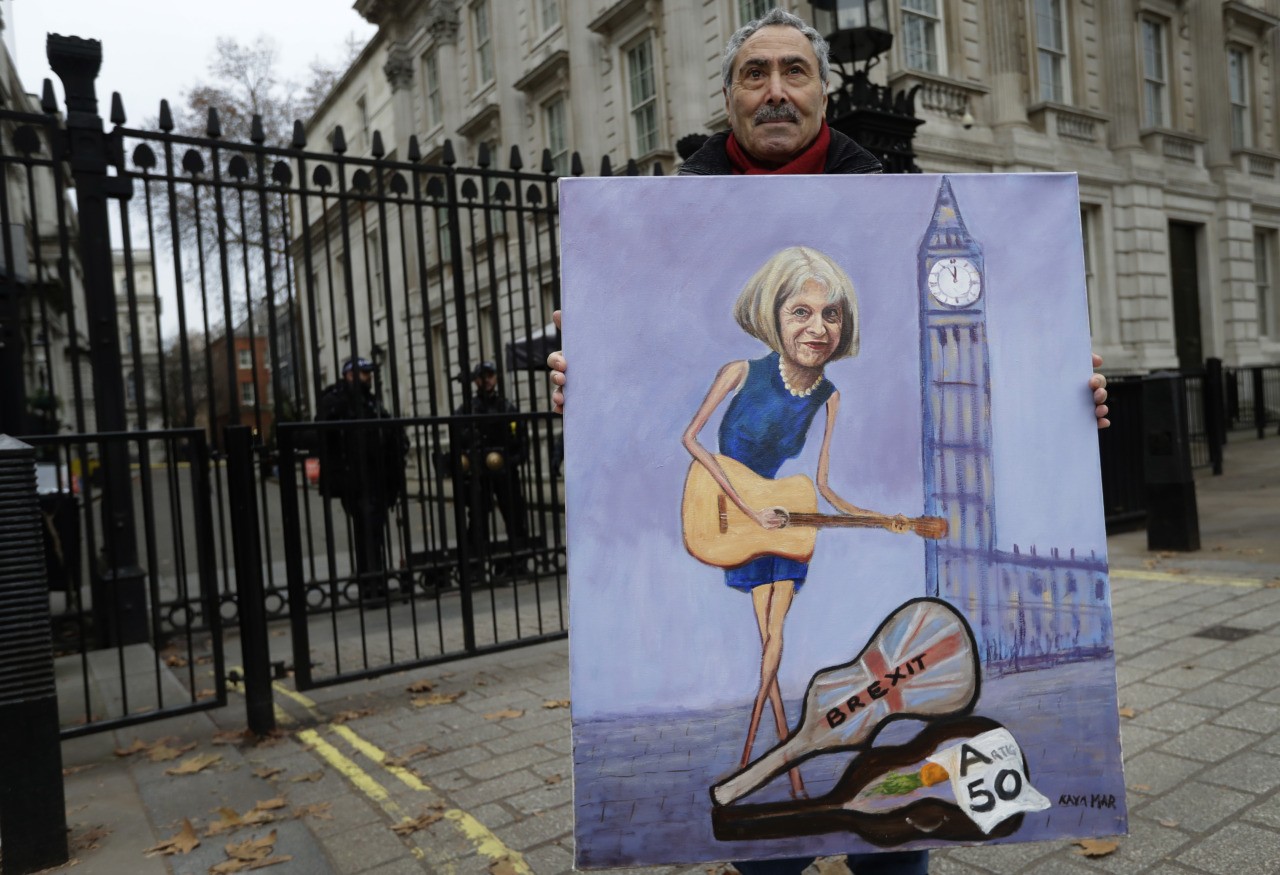 In perhaps the most significant revelation, the legal document warns that “in the absence of a right of termination, there is a legal risk that the United Kingdom might become subject to protracted and repeating rounds of negotiations.”

This point follows the comments of Attorney General Cox himself in the House of Commons earlier this week, when he said it was a political, not legal matter. Yet the document reveals the arrangement as it stands makes this a distinct possibility.

Cox wrote: “In conclusion, the current drafting… does not provide for a mechanism that is likely to enable the UK lawfull to exit the Uk wide customs union without a subsequent agreement. This remains the case even if parties are still negotiating many years later, and even if the parties believe that talks have clearly broken down and there is no prospect of a future relationship agreement.”

Para 30 sums it up – the backstop lasts even if there is a basically a trade war going on between the UK and the EU.

Responding to the document, Labour’s shadow Brexit Secretary Sir Keir Starmer rejected the government’s previous excuse for refusing to publish the advice over it harming the national interest, writing that “All this advice reveals is the central weaknesses in the Government’s deal.

“It is unthinkable that the Government tried to keep this information from Parliament – and indeed the public – before next week’s vote.”

UPDATE 1245 — PMQs – Prime Minister Theresa May restates she said there is no “unilateral right” to pull out of backstop, tells SNP Scotland will leave EU on same terms as the UK.

The prime minister defended her government against Blackford’s claims that the facts differ from that published on Monday and that released in the full legal text Wednesday.

On claims that she “inadvertently” withheld details on the backstop from the House of Commons, May said, “Indeed I might take up the personal challenge from the Right Honourable Gentleman. I have myself said in the House that there is no unilateral right to pull out of the backstop.

“What I have also said is that it is not the intention of either party that should a) be used in the first place and b) if is used should be anything other than temporary.

UPDATE 1235 — PMQs – Ian Blackford SNP: What we have is “a government in crisis”

Ian Blackford, the Scottish National Party Member of Parliament for Ross, Skye and Lochaber, is the first since the full legal text was published to address the Government and May’s Brexit deal.

“What we were promised was strong and stable. What we have is a government in crisis”, he said.

“The first government to do so, Mr Speaker, in 40 years. And now a government that has been found in contempt of Parliament. Is it now time the Prime Minister took responsibility for concealing the facts on her Brexit deal and members of this house and the public. Will she take responsibility?”

The prime minister responded that Mr Blackford was “absolutely wrong” and denied concealing facts from the house of Commons.

Blackford responded that “the facts have had to be dragged out” of government and alleged, “the government is giving Northern Ireland permanent membership of the Customs Union and Single Market.”

“The legal advice is clear,” he said, “in international law, the protocol would endure indefinitely.”

Just minutes after publishing the full legal text against her own wishes, Theresa May faced the House of Commons again Wednesday afternoon.

Labour leader Jeremy Corbyn took the opportunity to make the most of his brief moment of not being the most despised party leader in the room by grilling the prime minister on child poverty, universal credit, and the “hostile environment” that resulted in deportations of the Windrush generation — rather than leading with Brexit.

Leader of the House of Commons Andrea Leadsom said Wednesday morning that the publication would have a major impact on government in future, as it would dissuade ministers from asking legal advice and Attorneys General from giving it, as it would no longer be considered confidential. The former Conservative leadership contender said the government published these documents “not without some regret.”

The release of the legal advice drawn up by the Attorney General Geoffrey Cox came after a bruising day in Britain’s House of Commons where the government lost three votes in little more than an hour, one of them a vote of contempt against the government which forced the document release itself.

The government was defeated by 311 votes to 293 over the motion of contempt, calling on members from six opposition parties to follow Labour and call on the government to publish its legal advice, which until now it had totally refused to do. Particularly concerning for the government was the fact the 10 MPs of the Democratic Unionist Party of Ulster, who the government relies upon through a 2016 agreement to prop up the Conservatives in key votes, were among those voting for the motion.

Among MPs who believe the advice would have proven that the government was misleading the public over Theresa May’s Brexit plan was Sammy Wilson, who said the paper would prove she had been lying to the country.

One of the votes against the government which created interest in the Westminster bubble was an amendment by former Attorney General Dominic Grieve, a Conservative MP, which it has been claimed would give the House of Commons to create its own Brexit deal by making the government’s plan amendable by the chamber.

Despite the excitement over the defeat, Tory Brexiteer and opponent of May’s deal Steve Baker MP pointed out any such vote would not be legally binding, as it would be a motion and now an act of law.

A ringleader among Tory Brexit rebels, Baker said of Theresa May’s Brexit plan in November that: “If this policy is taken forwards and if it becomes law it will make this country a regulatory satellite of the EU, unable to govern itself in a worse position than EU membership. A democratic vote will have meant nothing.”

After the votes, the Prime Minister opened a marathon session of five parliamentary days of debates, which are intended to conclude Tuesday, December 11th with a vote on the Brexit arrangement she brought back from the European Union. Facing enormous resistance to her plan, which critics point out is no more than a “Brexit in name only”, compromises the unity of the nation, and fails key tests on actually withdrawing the United Kingdom from the European Union like no longer being subject to EU laws, the Prime Minister already sounded resigned in her statement to the Commons.

Pausing frequently to take interjections from the floor, Theresa May reflected on her deal remarking: “Mr Speaker, I have spent nearly two years negotiating this deal. I have lost valued colleagues along the way. I have faced fierce criticism from all sides. If I had banged the table, walked out of the room and at of the process delivered the very same deal that is before us today, some might say that I’d done a better job.”