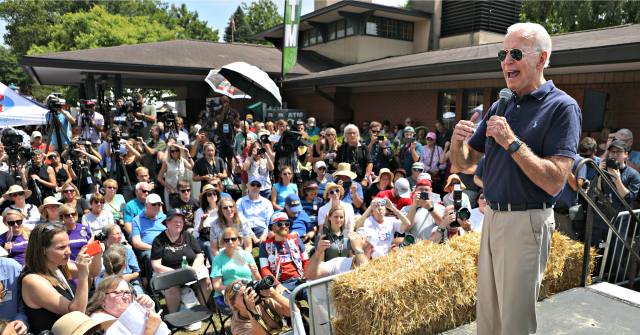 The exchange was the result of the 2020 frontrunner’s repeatedly misquoting the president’s remarks about the protest in which he specifically said: Neo-Nazis and the white nationalists “should be condemned totally.”

“Charlottesville — that hate and that venom that we saw, and then the president saying, when asked about the groups … as well as the young woman, when she was killed, he said there were very fine people in both groups. Very fine people,” Biden told attendees. “No president, sitting president has ever said something like that. And the only thing that’s happened is it’s gotten worse.”

After his remarks, Pollak approached Biden with a fact-check:

A transcript of the exchange is as follows:

FORMER VICE PRESIDENT JOE BIDEN: No, he called all those folks who walked out of that — they were neo-Nazis shouting hate, their veins bulging.

POLLAK: But he said specifically that he was condemning them.

BIDEN: No, he did not. He said — let’s get this straight — he said there were very fine people in both groups. They were chanting antisemitic slogans, carrying flags.

As Breitbart News and others reported copious times, Biden is indeed misquoting the president.

President Trump actually said, “I’m not talking about the neo-Nazis and the white nationalists, because they should be condemned totally.”

Below is the transcript of the relevant exchange (original emphasis):

REPORTER: You said there was hatred and violence on both sides?

REPORTER: The neo-Nazis started this thing. They showed up in Charlottesville.

REPORTER: George Washington and Robert E. Lee are not the same.

Based on President Trump’s remarks, it’s clear his “very fine people” comment referred to non-violent demonstrators on both the left and right. During the same press conference, the president also condemned the murder of Heather Heyer, describing it as an act of “terrorism” and “murder.”

CNN contributor Steve Cortes recently penned a Real Clear Politics opinion-editorial refuting his own network’s reporting on the president’s remarks by breaking down how the president especially condemned neo-Nazis — not lauded them:

Just last week I exposed this falsehood, yet again, when CNN contributor Keith Boykin falsely stated, “When violent people were marching with tiki torches in Charlottesville, the president said they were ‘very fine people.’” When I objected and detailed that Trump’s “fine people on both sides” observation clearly related to those on both sides of the Confederate monument debate, and specifically excluded the violent supremacists, anchor Erin Burnett interjected, “He [Trump] didn’t say it was on the monument debate at all.  No, they didn’t even try to use that defense. It’s a good one, but no one’s even tried to use it, so you just used it now.”

My colleagues seem prepared to dispute our own network’s correct contemporaneous reporting and the very clear transcripts of the now-infamous Trump Tower presser on the tragic events of Charlottesville.

Despite the clear evidence of Trump’s statements regarding Charlottesville, major media figures insist on spreading the calumny that Trump called neo-Nazis “fine people.”  The only explanation for such a repeated falsehood is abject laziness or willful deception.  Either way, the duplicity on this topic perhaps encapsulates the depressingly low trust most Americans place in major media, with 77 percent statingin a Monmouth University 2018 poll that traditional TV and newspapers report fake news.  In addition, such lies as the Charlottesville Hoax needlessly further divide our already-polarized society.