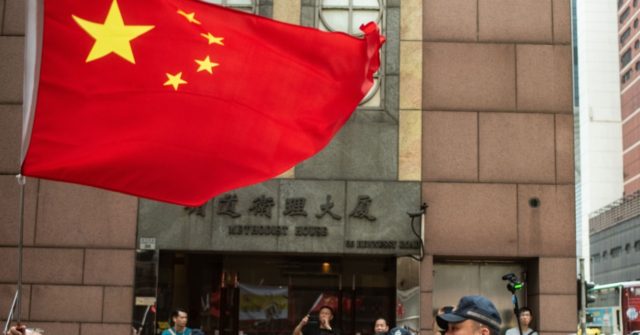 On the same day New Zealand summoned China’s diplomatic team to formally rebuke Beijing for encouraging violence against supporters of the Hong Kong protest movement at the University of Auckland, the Chinese Communist Global Times was praising violent pro-China students in New Zealand and Australia for using “creative methods to protect national sovereignty and dispel misrepresentation of pro-independence forces.”

The Global Times argued that patriotic Chinese youth living abroad had no choice but to get rough and engage in some “minor physical clashes” with “anti-China and secessionist protesters” because they have “drawn global attention.”

The Global Times accused Australian media of bias towards the Hong Kong protest movement, which the Chinese Communist Party is determined to portray as a secessionist tool of hostile Western powers, saying:

Like separatists in Hong Kong, anti-China forces in Australia have used the campus as an ideological battleground, pushing students to the front lines to draw attention and sympathy. Some experts were concerned that Western universities are becoming a breeding ground for secessionist forces.

The Global Times said it was contacted by Chinese students living overseas who “feel very angry at disappointed” that supporters of the Hong Kong protest movement are allowed to exercise free speech. The report continued:

“This is the first time I’ve seen these foreign separatist groups colluding together to disrupt peace and stability in China and driving a wedge between the mainland and Hong Kong. I always thought it was hyperbole in media before I came here, but the moment I saw it, I was furious,” Wang Jia(pseudonym), a graduate from South China’s Guangdong Province who witnessed the whole process, told the Global Times.

“The video shows that many of the protesters are white people. It’s ridiculous that a bunch of white people are protesting the domestic affairs of a country that they’ve never been to and barely know about,” said a 27-year-old graduate of UQ surnamed Gao.

“The ‘students’ who claim to support Hong Kong’s ‘democracy’ act as if they are prepared to provoke us, not as students but as paid professional actors,” a sophomore undergraduate surnamed Zhu who declined to give his full name described the scene to the Global Times.

“Some claimed to be protesters against the Hong Kong extradition bill but they were unable to show their student ID card upon reporters’ requests, leaving many to suspect their real identity.”

“At the end of the day, when the crowd was about to disperse, a white man burst into the crowd of Chinese students and shouted, ‘Free Hong Kong!’ I felt like his intention was to escalate the conflict on purpose or as part of a plan.”

Zhu said that some activists even gave the middle finger to students who opposed the protest and used Cantonese to insult mainland students. “They called us Communist thugs,” he said. But none of this was mentioned in local newspapers.

The Global Times claimed the “patriotic” students were falsely portrayed as initiating violent confrontations, while some of the students themselves took a different tack and said international media outlets are not doing enough to show how the pro-Hong Kong demonstrators “provoked” them.

“They made no mention of the protesters’ insults and personal attacks against us, but rather emphasized that we were blocking their freedom of speech. But we didn’t even get a chance to make our voices heard,” one Chinese student said.

The Global Times saluted pro-China students overseas for their “entertaining methods of expression,” such as creating “funny memes and slogans” or writing rap songs. No such appreciation for the cleverness of pro-Hong Kong students was expressed. Instead, Chinese “experts” were cited who believe “freedom of speech” is just a “tool used by Western countries to attack China” with “political correctness.”

The South China Morning Post reported on Wednesday that Chinese authorities are monitoring students who participate in demonstrations disfavored by Beijing overseas and paying menacing visits to their families back in China. Family members are instructed to tell their children studying in places like Australia that they had better not engage in “anti-China rhetoric” or their families might not be safe.

“I am greatly concerned. This is precisely why the Coalition government passed foreign interference laws in 2018, to protect diaspora groups from coercion by foreign state actors,” Australian MP Andrew Hastie, chair of the parliamentary intelligence and security committee, said after hearing these reports.

Australia, like New Zealand, has formally rebuked China for attempting to suppress free speech. The University of Queensland, which has seen disruptive behavior from students loyal to the Chinese Communist Party, urged students to contact the police if they were worried about their safety. Some students have reported receiving death threats.

A Chinese student group on Thursday demanded the University of Tasmania tear down posters supporting the Hong Kong protesters. The posters have been destroyed by vandals several times.

“Our student union has formally expressed strong dissatisfaction to the school about the campus insult to China and called on the school to build a clean and pure learning environment for students,” the group said.