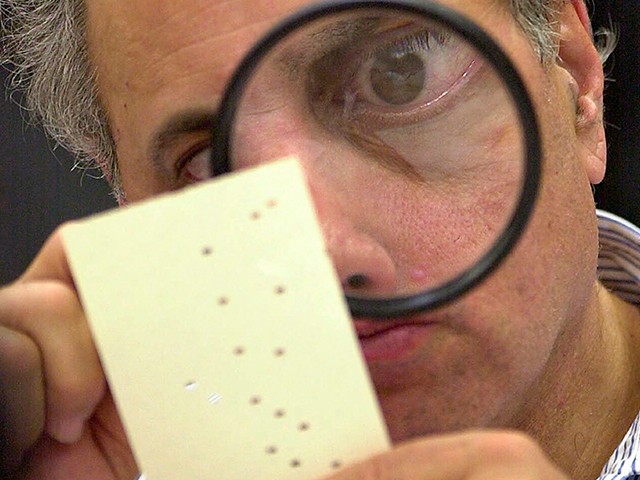 The prospect of a recount in the 2018 Florida Senate contest evokes unpleasant memories of the same area triggering a global political crisis after the photo-finish 2000 presidential election. (“Step right up: The recount circus has come back to Florida,” NBC News groaned on Monday.)

There is much apprehension among Republican voters because Democrats always seem to do incredibly well in these recount dramas, deploying strike teams of lawyers to obtain the most favorable possible interpretation of dubious ballots and harvesting a bumper crop of dubious ballots to interpret. Mysterious boxes of votes discovered after Election Day always seem to favor the Democrats by lopsided margins.

Here are some of the most famous recount shenanigans from times gone by:

1. Hanging Chads and Ballot Seances: The indelible image of the Florida recount was election officials staring at questionable punch-card ballots and attempting to “discern the intent” of the voters. The idea was that voters who didn’t properly punch out a vote for president must have been the victims of stubborn paper, malfunctioning punch machines, or confusing instructions.

“Chad,” the term for the little square of paper poked out of ballot slips under punch card systems, entered mainstream American discourse in numerous permutations: there were hanging chads, dimpled chads, pregnant chads, and more. Different jurisdictions had different rules for counting and discarding questionable votes.

The savage legal battle over whether unclear ballots should be studied by election-board swamis until the intent of the voter could be divined raged all the way to the U.S. Supreme Court, which finally stopped the Florida recount on December 12, 2000.

2. Disqualified absentee ballots: The 2000 election in Florida was marked by complaints from absentee voters that their votes were suppressed by incorrectly marking them as received too late to be counted. Many of these absentee voters were deployed military personnel who tend to vote Republican, leading to suspicions that partisan election officials were deliberately suppressing the ballots to help Gore. These suspicions were made deeper when a memo by Gore’s legal team with instructions on how to challenge overseas absentee ballots, including military votes, was discovered by Republicans.

A former deployed military voter named Dave Lowry wrote an account in the Washington Examiner on Sunday of how his 2000 vote for George W. Bush was improperly suppressed. In 2004, Lowry provided documentary evidence his absentee ballot was incorrectly suppressed to Broward County Supervisor of Elections Brenda Snipes, who is now a pivotal figure in the 2018 recount. “Brenda Snipes never responded to the letter. To date, my ballot has never been opened or counted,” Lowry reported.

3. Franken vs. Coleman 2008: The Miami Herald noted on Monday that only 26 recounts have been held in the United States since the 2000 election, and only three of them changed the outcome of the race. The most famous of those was the Minnesota Senate race in 2008 between Democrat Al Franken and Republican Norm Coleman.

Coleman, the incumbent, initially won re-election by a mere 725 votes out of 2.9 million cast in the election. His lead shrank to 221 because a wave of “corrections” submitted by local officials almost all favored Franken.

The ensuing hand recount included a large number of duplicate ballots that were created to replace damaged ballots but were not properly marked as duplicates. State laws were waived in some cases to allow dubious ballots, but not in other cases, generally using whichever approach favored Franken. Improperly marked ballots were interpreted using inconsistent rules that favored Franken. Rejected absentee ballots were improperly included. Complaints were later made that some 400 felons voted illegally. Some voters clearly were not interested in carefully following the instructions, producing ballots that might be rejected by machines or some human vote counters but accepted by others.

4. Rossi vs. Gregoire: The other two races since 2000 where recounts changed the outcome include the 2006 contest for Vermont state auditor and the 2004 Washington governor’s race. In the latter instance, Republican Dino Rossi originally won by 261 votes out of 3 million cast. Numerous recounts were held, producing different results, and several lawsuits were filed.

In the end, Democrat Christine Gregoire was pronounced the winner by just 130 votes. The bitter battle over the outcome dragged on for two months and cost millions of dollars, with both sides accusing each other of improper behavior, with Democrats denouncing Rossi as a “thief” at one point, while Rossi said the recount was not “clean” and one of his spokespeople called it a “total sham.”

As with the Minnesota 2008 recount and the Florida 2000 debacle, complaints from both sides centered on different methods employed to count and reject ballots in different counties.

5. The never-ending battle over sloppy voter rolls: In a taste of things to come after their stunning 2016 defeat, Democrats worked tirelessly to delegitimize President George W. Bush’s 2000 election victory, focusing obsessively on the photo finish in Florida. The Commission on Civil Rights fueled years of left-wing conspiracy theories by publishing a report in 2001 that accused Florida state government under Governor Jeb Bush, the new president’s brother, of “overzealous” efforts to purge ineligible voters from the roles. These efforts were said to have disproportionately and unfairly impacted black voters, who are far more likely to vote Democratic.

The report was criticized as tainted by Democrat partisanship and distorted by some unwarranted assumptions about the process of purging ineligible voters, but arguments over voter rolls persist to this day, and they figure heavily in recount dramas because voter registration data is vital to the debate. Left-wing groups invariably portray even the most carefully-administered registration cleanup efforts as nefarious conspiracies to suppress the Democrat vote. Voter registration controversies have raged through Florida several times, including the same Broward County that is ground zero for the 2018 recount drama, involving some of the same election officials. Ohio was the scene of another recent high-profile purge of voter registrations.