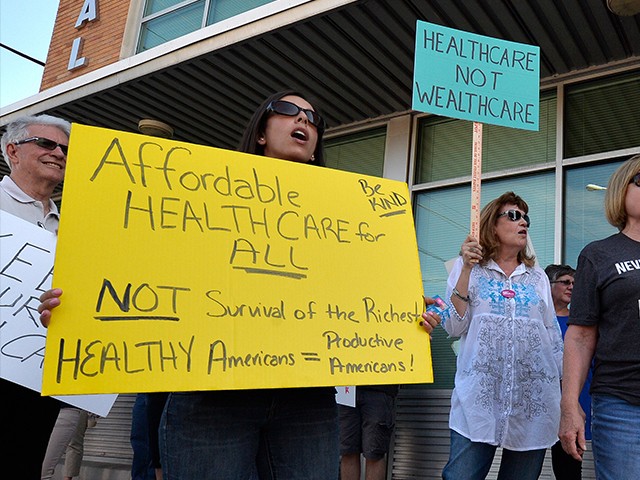 According to the exit polls, the biggest issue in the 2018 elections was health care. A full 40 percent of Americans identified health care as their prime concern; by contrast, the second-ranking issue, immigration, lagged 17 points behind.  Indeed, a nationwide map of political advertising this year showed that health care was the hottest topic.

Moreover, if we examine the very specific choices on healthcare policy made by the voters in a half-dozen states, we can see even better the power of the issue. In four states, the expansion of Medicaid, yea or nay, was on the ballot, and in three of those states—Idaho, Nebraska, and Utah—the ayes had it. (Montana voted no.)  In addition, in two other states, Kansas and Maine, the voters replaced Republican governors who had opposed Medicaid expansion with Democratic governors who support it.

Interestingly, this idea of Medicaid expansion traces back to the Affordable Care Act of 2010, also known as Obamacare. Under the law’s provisions, every state had the option of expanding Medicaid, with the federal government chipping in 90 percent of the cost. Prior to Tuesday, 32 states had chosen to accept this incremental Medicaid funding, while 18 had not. (Not surprisingly, the big blue states long ago got on the Obamacare-Medicaid train, while the non-expansion states were almost all red.) Yet now, in the wake of Tuesday’s voting, the number of non-expansion states has shrunk from 18 to 13.

We might pause to note that the topic here is Medicaid expansion, not Medicaid itself. Medicaid for the poor has been a law since the 1960s, and it’s not going anywhere. Instead, the issue, these days, is whether or not to expand the program upwards, to include the working poor—that is, folks with jobs who are just scraping along. Obamacare gave states the option of expanding Medicaid eligibility to families with income up to 138 percent of the poverty line—which is to say, those on the lower economic end of the middle class.

So we can see: Obamacare was never really about the poor, because they were already covered. Instead, the intended beneficiaries were the working class. And these days, when Republican politicos are increasingly interested in winning over blue-collar and service workers—including those wary TIGRs–the idea of extending coverage to them shouldn’t be regarded as a crazy idea.

Of course, Obamacare itself can always use a good reforming. After all, there were plenty of hot-button issues entwined in that legislation, including top-down control and exotic social-engineering. And yet the issue of Medicaid expansion, as a subset of Obamacare, is relatively straight-forward. Uncle Sam is either helping working stiffs with their medical issues, or he’s not.

We can quickly see that quite a few Trump voters are included in this category; yes, these are the new Republicans, and this is the new Republican Party. So it’s revealing that Medicaid expansion passed in Idaho—arguably the most Republican state in the country—with more than 60 percent of the vote.

Still, plenty of Republicans are staunchly opposed to any expansion of Medicaid, just as they might wish to be rid of all social-welfare programs.

Everybody’s entitled to his or her own beliefs, of course, but as the recent election results show, opponents of a social safety net are increasingly having to argue with their fellow Republicans.

Yes, we are having, yet again, a big debate over healthcare coverage—in both parties. The Democrats, of course, have always been mostly on board with Obamacare; the controversy for them, now, is the idea of Medicare For All.

As for Republicans, few GOPers have anything nice to say about “Obamacare,” but especially lately, they have had plenty of nice things to say about guaranteeing coverage for those with pre-existing conditions. In fact, these days, it’s hard to find a Republican who doesn’t want to guarantee such coverage. And yet as many libertarian purists have griped, such a coverage guarantee is, in effect, a cave-in to Obamacare.

Yes, Republicans have some hard thinking to do on health insurance; after all, last year, at the peak of the repeal-Obamacare push, a full 81 percent of Americans opposed the GOP effort.

As for 2018, the reader might ask: Did it seem as though the GOP had a strong and steady party-wide message on Obamacare this year? A plausible pitch on “repeal and replace”? Or on anything related to health care? Or did Republicans mostly wish to mumble and change the subject?

Well, as the polls—and the House election results—suggest, mumbling around isn’t such a good option anymore.

For their part, the Democrats are obviously convinced that they have momentum on health care. Yes, that’s a big change from 2010, or even 2014, but then, a lot has changed in the last few years.  In terms of healthcare advocacy, the Democrats did, indeed, get clobbered in the 2010 and 2014 midterms, and yet they stuck with their program, and now, finally, it’s picking up in popularity. (Although Democrats have a point when they argue that national health insurance has, in fact, been mostly popular going back as far as 1945.)

So today, the donkeys are stampeding. One report this year found that 61 percent of pro-Democratic ads in U.S. House races focused on health care. Or as The New York Times wrote in the wake of the elections, Democrats “delivered a message about healthcare with the repetitive force of a jackhammer.”

Still, people don’t necessarily trust the Democrats on health care. It’s interesting, for example, that the polls on Obamacare still show some ambivalence about the program: According to the Fox/AP/NORC exit poll, 51 percent of Americans want to repeal Obamacare, either wholly, or, just “parts” of it. By contrast, 47 percent wish to leave Obamacare as is, or expand it.

Thus we can see, such close numbers offer encouragement to anti-Obamacare Republicans, even now. Yet as the GOP discovered over the past two years as it slogged and quagmired World War One-style on Obamacare repeal, the devil is in the details. For instance, what does repealing “parts” of Obamacare actually mean? Which “parts”? Republican attacks over the last decade might have made the name of Obamacare unpopular, but the idea of getting everyone covered is a far different story.

To illustrate, we might consider another question asked in the same exit poll: “Do you think the federal government has a responsibility for healthcare?” On that question, 58 percent of Americans said yes, and only 41 percent said no. If we pause over those numbers, including the 17-point spread between “yes” and “no,” we start to see why the Democrats are feelin’ groovy.

Moreover, a Reuters/Ipsos poll from August found that a whopping 70 percent of Americans—including 52 percent of Republicans—support Medicare For All.

Yet as we look at these numbers, we must emphasize, once again, that the devil—or at least a demon or two—is lurking in those details. For instance, while the Medicare program for senior citizens is enormously popular, it is not necessarily the same thing as Medicare For All, as advocated by, most famously, Bernie Sanders.  While Sanders and his comrades have been notoriously vague about the precise details of what they’re in favor of, it seems that most advocates are looking to create a Canadian-type healthcare system—that is, socialized medicine, heavy on centralized bureaucrats and lefty agendas, including abortion and sex-change operations.

So if Republicans wish to offer an alternative, they should start offering it. If they wish to be part of the debate, then it seems that it’s necessary, first, to acknowledge the worthiness of the goal—that everyone gets covered. As we have seen, that’s what the American people support, and, after all, it’s their country.

The Republican opportunity, then, is to argue the healthcare issue in a conservative way by endorsing market forces while nixing lefty nuttiness. Just about every conservative policy maven thinks he or she has such a plan already; the challenge is to link it to the growing support for coverage and then sell it to the country.

In fact, all through modern history, parties on the right have often been the pioneers of no-nonsense social insurance. Indeed, the very first such system was created, back in the 19th century, by Germany’s Otto von Bismarck. As his nickname, “Iron Chancellor,” might suggest, Bismarck was no liberal; he simply figured that the maintenance of a conservative public order and robust national morale required some conscious effort by the national government. To put it another way, there’s strength to be found in unity, and yet unity requires mutuality. If a leader wants his people to care about the well-being of the country, then the country has to care about the well-being of the people. Isn’t that what nationalism is all about?

Admittedly, this is not a libertarian argument, but it surely is a conservative argument. That’s why top leaders on the right—from Winston Churchill to Charles DeGaulle to Richard Nixon to Margaret Thatcher—have all supported the idea, at least, of national health insurance.

The goal of getting everyone covered does not have to mean a hulking bureaucratic colossus. It simply means making sure that everyone is covered.

Is that really that hard? Isn’t it the essence of strong nationalism to say, We take care of our own?