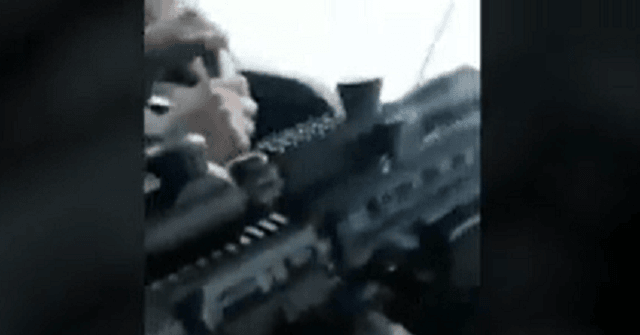 A video obtained from law enforcement officials shows what appears to be a heavily armed Mexican cartel conducting a human smuggling operation in South Texas. Officials indicated the smuggler’s drop off point was near Hebbronville, Texas, about 80 miles from the border with Mexico.

Law enforcement in South Texas is still investigating this incident but what is clear from the video is that a significant escalation in smuggling tactics is underway far north of the U.S.-Mexico border. Breitbart Texas traveled to the border last week to cover smuggling operations in the small border community of Roma, Texas. During the border tour, we obtained this exclusive video from local law enforcement.

As the video begins it appears you are watching yet another cartel video from deep inside Mexico with heavily armed cartel sicarios. However, this is not Mexico, this incident occurred in south Texas near the small community of Hebbronville located approximately 80 miles north of the U.S. Mexico border from Roma, according to Breitbart’s law enforcement sources.

The incident reportedly occurred Friday evening on dirt roads near FM1017 traveling toward Highway 285. This location is near a local Border Patrol checkpoint. These back roads are commonly used by smugglers to avoid the checkpoint, law enforcement sources said.

The first thing you notice from the video is the barrel of a rifle with after-market equipment including a quad rail, high capacity drum magazine, scope, and a fore-grip being held by the passenger. The passenger also appears to be videotaping the smuggling operation.

On the dash of the vehicle is a removable emergency light bar typically used by law enforcement. Cartel operators in Mexico frequently utilize the light bars to help them speed through traffic as needed.

The driver is seen wearing a face mask and tactical camouflage clothing. The passenger holding the rifle is also seen wearing black tactical pants and a camouflage shirt as they speed toward their destination on backcountry roads.

As the camera turns toward the back seat of the vehicle you finally see what this operation is all about. A large number of people hiding in the backseat and throughout the bed of the truck are being hauled to a transfer connection.

Google maps can be heard in English letting smugglers know their destination is approximately a half-mile on the right. Officials say this is an indication the operation is located inside Texas.

The smugglers tell the occupants to get ready as Google maps can be heard once again informing, the smugglers they have arrived at their destination on the right.

The driver suddenly stops the vehicle, slams it into park, grabs the rifle from the passenger, and exits to provide cover as all of the smuggled migrants exit simultaneously. The migrants then jumped over a gate later identified to Breitbart Texas by law enforcement.

The migrants then climbed into a waiting silver Ford pickup truck backed up to the gate.

Law enforcement told Breitbart they are extremely concerned about this incident. They could not recall a time when human smugglers used such heavy weapons and tactics to smuggle people especially so far north of the border. This is a clear escalation in tactics used by smuggling organizations inside the United States. Officials said they expect other incidents to follow.

Jaeson Jones is a retired Captain from the Texas Department of Public Safety’s Intelligence and Counterterrorism Division and a Breitbart Texas contributor. While on duty, he managed daily operations for the Texas Rangers Border Security Operations Center.