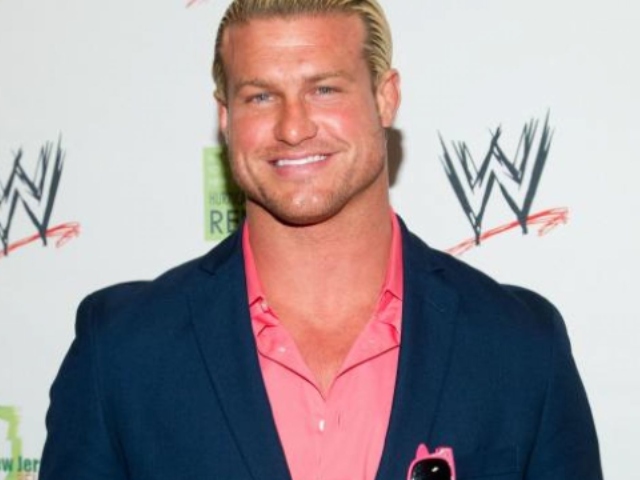 The man they call “The Showoff” is trying his hand in show biz. WWE superstar Dolph Ziggler, known for taking down his opponents, is now doing stand-up. Just like he approaches his work in the ring, Ziggler is taking this challenge very seriously.

Ziggler is the headliner of DZ Comedy Tour which kicked off on January 27 in Phoenix. This first run goes through March and makes stops in seven cities. But all indications point to this being just the first leg of what could turn out to be an ongoing endeavor. Ziggler and comedian Sarah Tiana are quickly becoming the best tag team in all of comedy.

“I’m doing comedy stuff and some L.A. stuff for the time being,” Ziggler told Breitbart Sports. “It might be a long time, it might be permanent, we’ll see. That’s all very much up in the air right now.”

What’s not up in the air, is Ziggler’s zest for comedy. “I grew up loving wrestling from five-years old on,” Ziggler said. “Just like wrestling, I was into comedy.”

It runs in the family. Ziggler’s brother Ryan Nemeth (Ziggler’s real name is Nic Nemeth) is in Los Angeles doing a bunch of comedy work himself. The Nemeth boys loved to laugh at an early age. “We’d be watching the old Saturday Night Live reruns when I was 7-years old and didn’t know what they meant, but I was still into it,” Ziggler said.”I got into comedy, and for the last fifteen years or so, I’ve just been writing and filling up notebooks because I treat it the way I treat wrestling. If I’m watching a movie or a character, I wonder how I can apply it. I’ve been filling up notebooks for years and just studying and trying to be awesome.”

Early exit polls show the awesomeness quotient for Ziggler’s stand-up has been high. “I haven’t heard one bad comment on Twitter,” said Ziggler. “People come to the show to get an autograph and meet Dolph but then say ‘Wow, that stand-up set was very good’.”

Despite having the desire to share his comedy with the world, the logistics just simply didn’t align for Ziggler, until now. “I did my thirteen years straight without any vacations to be able to branch off and do some other things,” Ziggler said. “Over the last couple of years, I was putting those seeds in the ground.”

It wasn’t easy. Up until about a year and a half ago, Ziggler was on the road with the WWE, five and a half days a week. He had no breaks to let injuries heal and no solid time off. So, Ziggler studied comedy and jotted down what he could while on planes and in cars. Still, doing big things on the side was almost impossible. Lately though, it’s been more of a four day a week WWE schedule, so Ziggler can fit shows in between wrestling. It’s still daunting, but if anyone has the intestinal fortitude to pull it off, it’s “The Showoff”.

It’s been said, you can tell a lot about a person by the company they keep. If that is indeed the case, then Ziggler is quite a guy. Two of Ziggler’s best friends in the WWE are Zack Ryder and The Miz. The three have something very valuable in common: Work ethic. These are men that go above and beyond to become better. “We all slowly gravitated to each other because the hard work was there, putting in the extra time,” Ziggler said. “When Miz is making a movie, he’s still doing something else on his phone. When Zack is on YouTube, he’s also got a podcast that same day. When I’m wrestling and doing comedy, I’m giving it everything I have. We all built a friendship on hard work.”

Dolph Ziggler is one of the best wrestlers in the business. He’s won every major title the WWE has to offer. Most recently, Ziggler held the RAW tag team championship with Drew McIntyre. Ziggler is brash, flashy, and often a heel. But, he is also a technician. He can wrestle with the best of them. Nic Nemeth set several collegiate wrestling records while at Kent State, so it’s no wonder Ziggler has elite skills. Over the years he’s become the best in the world in the professional ring, as well as on the mic. Ziggler brings it every night. He reminds fans of some of the greats of the past while always evolving into the future. And while The Miz and Ryder are wrestlers he respects, the budding comic has a funny man he holds in high esteem too; someone he used to watch on SNL all those years ago.

“I’m a huge fan of David Spade no matter what he does,” Ziggler said. “I feel like we have this weird kindred spirit. He plays smarmy, douchey characters sometimes, and I’ve done that for my entire life so I tend to see that. When he has a book come out, I read it and it’s exactly what I was thinking. He’s so funny and quick and great. I listen to a lot of his stuff and his last couple books have been really cool.”

Whether it’s in the ring or at the comedy club, Ziggler knows who has his back. “Every show, I’ve been so lucky because of the loyalty of the WWE Universe,” said Ziggler. “I just keep racking up the reps and they’re cheering me on. My brother and I have done improv shows together and written some other things, and WWE fans are there to support it all.”

Those fans get their money’s worth. DZ and Friends may feature Ziggler’s brother, wrestlers, and other surprise guests. Fans see sketches, wrestling interaction, and of course, the stand-up. Ziggler has survived many a fatal four way over the years, but now he must navigate his way through Roast Battles with the seasoned Tiana. He is meeting the challenge head on.

The first show of the tour started right after the Royal Rumble in Phoenix, Arizona. Where else can you say the man that’s making you laugh at a comedy club, eliminated McIntyre and super kicked Nia Jax mere moments before he took the stage? Only on the DZ Comedy Tour. Like Ziggler, the show is unique.

While Zigger is known for his athletic prowess and now for his foray into the world of comedy, he’s also a thoughtful man. While many wrestlers shy away from politics at every turn, Ziggler has not been afraid to speak his mind and give political opinions. A regular guest of Kennedy on FOX News Channel, Ziggler likes to mix it up on the air just like he does inside the squared circle. At the same time, he understands why some wrestlers tap out when it comes to politics.

“It’s a scary territory these days if you have the (perceived) wrong opinion on someone,” Ziggler told Breitbart Sports. “The Internet is snarky enough already. I even caught myself being negative, and then said this needs to be more of a fun space.”

As he’s demonstrated on social media as well as on television, Ziggler does his homework. A political science major at Kent State, Ziggler has been following national and world events for some time. “I was studying politics way before everyone started talking it two years ago,” said Ziggler. “I love it. But I kind of have to tone it down. I spend the majority of my politics talking on Kennedy’s show or in an article I write. It’s a hostile environment no matter what side you take. A lot of times some commonsense and everyone not talking in all CAPS and exclamation points, and you can find a way to break some common ground with a lot of people.”

Ziggler walks the walk on that one. “The reason WWE sends me overseas to different countries and on PR tours is because I can talk to almost anyone and bring it back to wrestling or bring it back to politics or how we’re all 99-percent the same people,” he said. “I kind of have a gift at that and I’ve been pretty lucky so far.”

As for what politician may be most like Ziggler nowadays? Perhaps Senator Rand Paul (R-KY). “We both have interesting hair,” Ziggler said. “We’re in the middle on some things. A little libertarian here and there.”

Like most pro athletes, Ziggler has his rooting interests. A big Cleveland sports fan, the Ohio native is ecstatic over the improvement the Browns made in 2018. Cleveland went 7-8-1 after winning just one game over the course of two full seasons. Now, the Browns are led by a confident quarterback named Baker Mayfield, who has a little bit of Ziggler in him for sure. Baker and the boys have given the Browns’ spirit squad something to cheer about for the first time in years. “Everyone was excited saying let’s see if we can get four (wins),” Ziggler recalled. “Once we got one down, it’s been nothing but excitement. Baker’s done great things but also the rest of the team around him has been so great. We’ve had a long time of not successful football and the city has never not gotten behind them, never gave up on them. I got to see them live this season. It’s exciting to see them playing well and seeing Cleveland excited for Browns football.”

Nic Nemeth was a little boy back when Bernie Kosar’s Browns were making multiple appearances in the AFC Championship game. “I remember how exciting it was,” Ziggler said. “It’s time to keep that excitement going.”

Chipotle and Hooters best be prepared. They have been Ziggler’s go-to spots after grueling matches. Now, he’ll be ready to gormandize after a night of providing some belly laughs. “Without a doubt, Chipotle and Hooters are the best,” Ziggler said. “You can eat healthy at both of them, which makes my day. Hooters has been there after a late night RAW. Get some grilled wings and some celery and some unsweetened iced tea and you can really have a good time.”

Ziggler is having a good time in the ring and at the mic, while providing a good time for those watching him. He’s giving it his all with that Miz/Ryder attitude. “The more I can put myself into it, the more I can fire people up,” Ziggler said. “I give it 110-percent. You have to be a Renaissance man or woman to make it these days. You have to be quick, an athlete, awesome at talking, be able to go do a movie, do TV, do PR work. That’s why WWE superstars are so awesome at what they do.”

Ziggler has been stealing the show for years. Now, as he zig zags his way through wrestling and comedy, rumors are swirling that he may be wrapping up his wrestling career. Others have wondered if perhaps he may leave the land of the WWE and sign with new kids on the block, All Elite Wrestling.

One thing’s for sure, whether it’s wrestling or comedy, people want to see Dolph Ziggler. He has proven it’s not showing off, if you back it up. That resonates.

One more thing is certain. Those who appreciate a true pro, do not want to hear Ziggler say “Later, marks” anytime soon. He’s too good in the ring to hang ’em up, even if he goes all the way in the comedic world. The Heel Crew wants more of Dolph Ziggler and they don’t want the David Spade fan to say ‘buh-bye’ just yet.