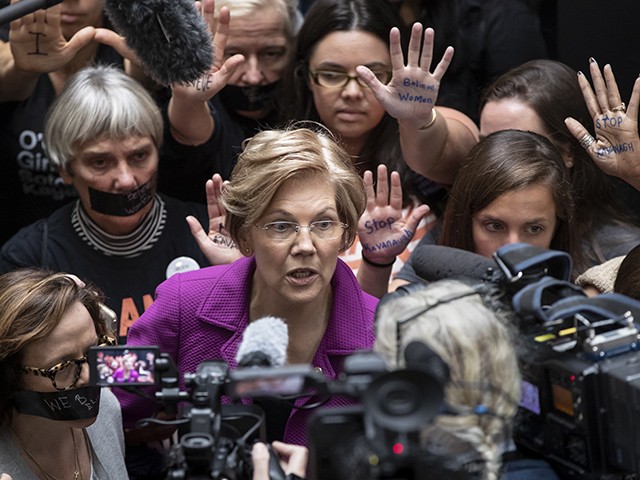 In a letter sent on behalf of the George Soros-backed organization MoveOn.org, Warren detailed her anger over Senate Judiciary Committee’s handling of Kavanaugh’s confirmation process, accusing Republicans of “appalling behavior” towards Christine Blasey Ford, the California psychology professor who the FBI found to have leveled an uncorroborated allegation of misconduct against the Supreme Court nominee. “I’m angry that while many women had to relive the worst days of their lives last week, powerful men are doing everything they can to help a powerful man get one of the most powerful jobs in the country.”

“Kavanaugh’s proved that he’s just an entitled judicial hit man. A partisan hack who peddles conspiracy theories against Democrats and could take out revenge on us, decision by decision, if he is confirmed,” Warren wrote. “Kavanaugh could dismantle generations of gains—one Court decision at a time—from reproductive rights to marriage equality to environmental protections, and so much more.”

The hot-headed email comes after the 2020 Democrat hopeful accused Kavanaugh of making contradictory statements during his testimony before committee members, citing the Federal Bureau of Investigation’s (FBI) seventh background check of the judge. “I would like to back up these three points with explicit statements from the FBI documents, explicit statements that should be available for the American people to see,” Warren said, before accusing Republicans of hiding details of the claim. “The Republicans have locked the documents behind closed doors with no plans to inform the American public of any new information about the Kavanaugh nomination.”

Warren is no stranger to uttering explosive, unfounded claims about the Trump court pick. In Septemeber, the Massachusetts Democrat warned women who need to resort to receiving “back-alley abortions” if Kavanaugh is confirmed to the United States’ highest court, claiming the “lives and futures of countless” American were at stake.