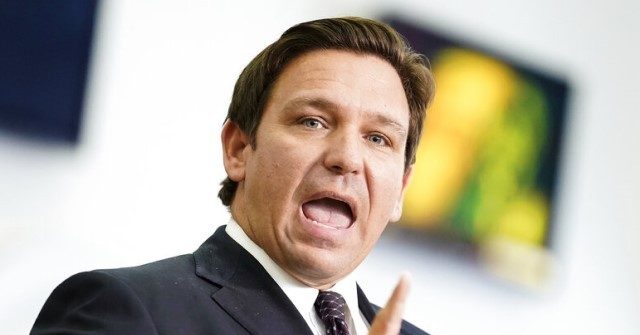 Florida Gov. Ron DeSantis (R) on Tuesday ripped blue state governors who have had a sudden “epiphany” and are lifting mask mandates on children in schools, noting that Florida — which has remained under constant scrutiny from the establishment media and left for prioritizing liberty throughout the pandemic – led the way and stressing that “the medical science didn’t change, the political science changed.”

“I’d also just like to say, you now hear a lot of chatter in other states around the country about, ‘Oh we’re going to lift mask mandates on these little children as if they somehow they just had an epiphany or even some suggest the science has changed,” DeSantis said during a press conference in Polk County.

“And let me just tell you. The science has not changed one iota. We knew from the beginning, and that’s why Florida never imposed a forced masking policy on school children, and that’s why we fought to liberate the kids from the forced masking that was done on the local level because there was never a justification for it,” DeSantis explained, blasting the Biden administration and CDC for pushing forced masking.

“If you look at what the CDC and Biden administration did, they are outliers in the rest of the world. You look at all the other industrialized countries. Not one country was as absolutely insane about forced masking kids as the United States government was,” he continued, noting that the Sunshine State stood up to the Biden administration, “stood with the parents, and we stood with the well-being of the kids.”

“And I can tell you, the kids are so much happier being able to go to school without having to wear masks for eight hours a day,” he said, explaining that these blue state leaders are only making these moves because it is now beneficial for them politically.

“So when you start to see them kind of reevaluate or say all this, just understand this. The science didn’t change. The medical science didn’t change. The political science changed. They feel the heat. They know that voters have been tired of perpetual lockdown policies. They know that they have basically offered no offramp and they know that they’re fixing to be whooped at the polls, so that’s causing the epiphany,” he said, making it clear that the “actual science” backing up Florida’s policies was available from the beginning:

The medical science on forced masking children didn’t change — the political science did. In Florida, we never imposed state mask mandates, and we liberated children and parents from the local authorities that did. We hope every jurisdiction will follow suit. pic.twitter.com/Dz4SgObVJx

DeSantis said the country will continue to see “more and more” of what he described as these “sudden epiphanies,” adding, “but this is stuff that we had information on a long time ago.”

Indeed, throughout the pandemic, DeSantis refused to implement a statewide mask mandate or embrace extended lockdowns, coming under heavy scrutiny from the establishment media, which championed blue state leaders such as former New York Gov. Andrew Cuomo (D), where thousands of nursing home patients die of the Chinese coronavirus under his watch and initial directive.

Florida moved to keep businesses open and prioritized protecting jobs and parents’ rights, but some, DeSantis said, had “spasms” throughout it all as the governor moved to make liberty the top priority.

Yet, now, “everyone is doing what Florida was doing from the beginning,” DeSantis said, noting that blue states lifting mask requirements on children is just another example of that:

Dems 2022: Schools are open because of us. Say thank you.

Gov DeSantis 2021: Protects parents’ right to decide whether or not their own kids wear masks in schools.

Dems 2022: School masks are optional because of us. Say thank you.

While he said it is evident that leftists are making these moves because it is politically expedient for them to do so, DeSantis said he wants all children across the country to be in “good shape.” However, he emphasized that Americans should not let anyone tell them that “somehow the science has all of the sudden changed.”

“It’s been pretty obvious from day one,” he added.