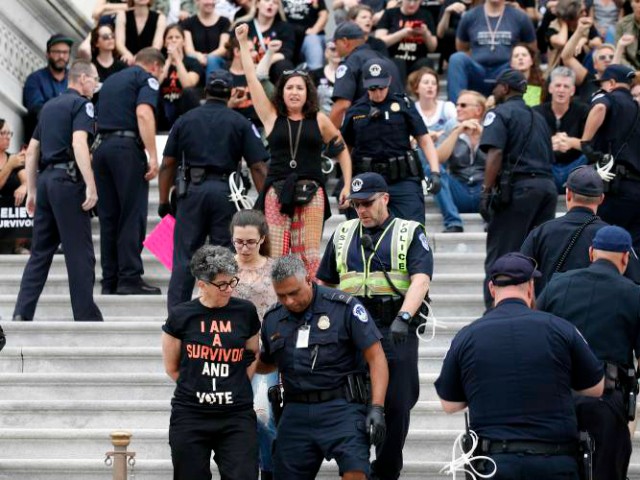 After losing the war to defeat Brett Kavanaugh, Democrats are thinking about becoming even “more ruthless,” reports the far-left Politico.

After launching at least a half-dozen debunked and outright phony allegations of criminal sexual deviancy against Kavanaugh, after accusing him of running a gang rape ring where women were drugged as a means to incapacitate them, after legitimizing the harassment of President Trump and Kavanaugh supporters up to and including chasing them out of public spaces, Democrats are thinking about becoming “more ruthless”?

Other than violence, what is left?

In all seriousness, how can Democrats become “more ruthless” than they have already been without resorting to violence?

The Politico piece is utterly deranged in its fact-free premise, including anti-science nonsense such as, “Democrats keep playing by a set of rules.”

Are we talking about the same Democrats who violated every norm to hold onto Christine Blasey Ford’s allegations against Kavanaugh until it could do the maximum damage? Are we talking about the same Democrats who used procedural trickery to pass Obamacare? The same Democrats who nuked the Senate filibuster? Who politicized the FBI to try to frame Trump as a Russian spy? Who weaponized the IRS against the Tea Party? Who accused Mitt Romney of murder? Who investigated Sarah Palin’s womb? Who accused Palin of a mass murder in Arizona? Who invented Borking? Who threatened a broadcast network’s license over a miniseries? Who are promising to pack the Supreme Court with more justices?

Those Democrats seriously believe they are playing by the rules and need to become even more ruthless?

Already, and with the silent (and sometimes not-too-silent) approval of Democrats, Breitbart News has documented over 580 individual acts of violence, vandalism, harassment, and threats aimed at Trump supporters.

Already, and with the silent (and sometimes vocal) approval of the Democrats’ allies in the establishment media, over 580 acts of ruthlessness have been committed against Trump supporters during the Trump era.

Whether Trump knew it or not, his remarks were perfectly pitched to stoke anxieties that have haunted many top Democratic operatives for a generation: the fear that their party loses big power struggles because Republicans are simply tougher, meaner, more cynical and more ruthless than they are.

If after all of the above, Democrats fear they must become even more ruthless to obtain power, I guess we now know why they are so desperate to abolish the Second Amendment.