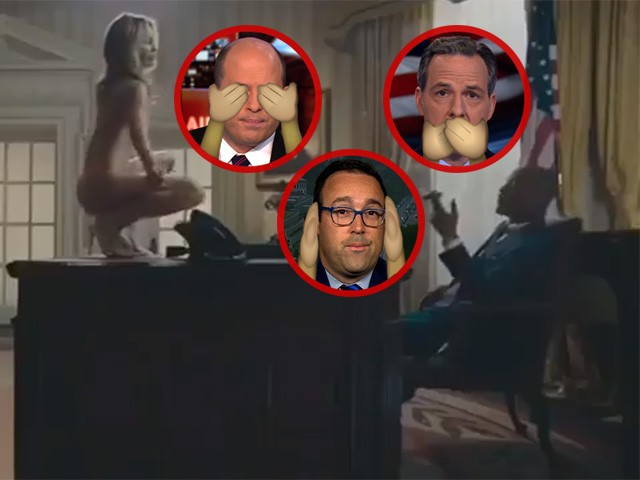 Several of CNN’s most infamous virtue-signaling anchors and editors melted down Tuesday after President Trump joked about Stormy Daniels’ looks — yet have stayed silent about a video from rapper T.I. depicting Melania Trump as a stripper in the Oval Office.

Rapper T.I. recently released a video that featured a look-alike of First Lady Melania Trump getting naked and dancing for him in the Oval Office. This video was meant to promote his upcoming album.

Melania Trump’s spokeswoman Stephanie Grisham slammed the video as “disgusting” and called for a boycott of T.I.’s music.

However, despite the fact that CNN melted down all day Tuesday over Trump referring to Stormy Daniels as “horseface” — after Daniels peddled insults about the president’s penis in multiple TV interviews, CNN included — the network’s main personalities have remained virtually silent about denigrating the first lady.

Jake Tapper, who was very concerned about Trump demeaning Stormy Daniels’ looks, had nothing to say to defend FLOTUS. Tapper has not made any apparent statement on the T.I. music video or its nude Melania stand-in.

Chris Cillizza fumed, “It’s not new that Donald Trump assesses women almost entirely on how he thinks they look. But it is gross and outrageous nonetheless.”

It’s not new that Donald Trump assesses women almost entirely on how he thinks they look.

But it is gross and outrageous nonetheless.

“And then I called her Horseface!” pic.twitter.com/sOrBYIkVGY

Yet a Twitter search reveals that neither Cillizza or Stelter have condemned the portrayal of Melania Trump.

Other CNN personalities melted down over Trump’s remark about Daniels as well.

Bennett wrote up the statement in an article titled “First lady’s office calls out T.I. for ‘disgusting’ video depicting Melania Trump” and appeared on CNN Newsroom With Brooke Baldwin to discuss the story — framed around Grisham’s response rather than T.I.’s inciting action. This segment is the only on-air mention of the story that Breitbart News could find in a good faith search.

CNN, days later, published an op-ed from outside contributor Jill Filipovic that condemned the video, but not without attacking President Trump as a “piggish, unrepentant misogynist.”