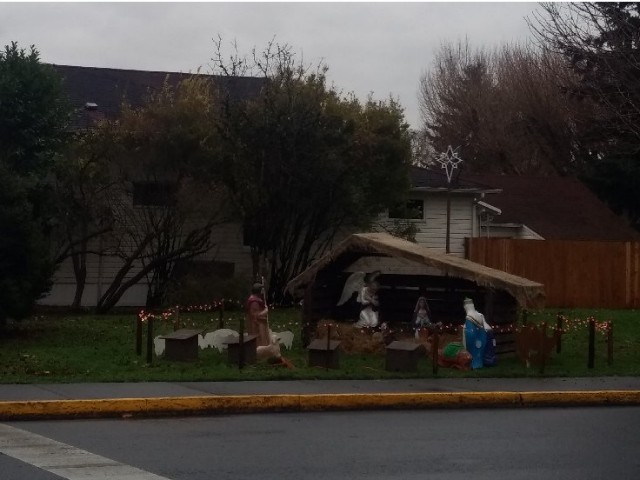 City officials removed a Nativity scene from a public park in Woodland, Washington, on Tuesday after receiving several complaints that a Christian display was featured on public property.

Officials said they made the decision after the city attorney told officials that keeping the Nativity scene on public property would run afoul of state and federal laws.

“I wouldn’t have chosen to do this, but it’s in the best interest of the city to do so,” Mayor Will Finn told KPTV. “The feedback I’m getting is that it’s in a better spot.”

The Nativity scene— featuring a manger with the baby Jesus, Mary, Joseph, an angel, the three wise men, and several animals— had been on display at Horseshoe Lake Park in Woodland for decades, although the scene itself is privately owned.

Finn confirmed with KPTV that the manger had been displayed in the park during the holidays for the past 40 years.

But even though the Nativity scene had graced the presence of Horseshoe Lake Park for decades, the city reportedly received complaints about its Christian nature.

City administrator Peter Boyce said the city received five complaints about the display since the city put it up this month.

Upon announcing the city would move the Nativity scene to a privately owned lot, officials received pushback from residents for the decision.

“Our grandkids love it when they put little baby Jesus out,” said Woodland resident Jenny Tingley. “I didn’t think it was offensive at all. I thought it added to the look of our town when it’s the holidays.”

Finn defended the city’s decision Tuesday in a statement on Facebook, saying that while he is not personally against the Christian display, he wants to respect “the public nature of public property”:

“I personally see the Nativity as a symbol of Christmas and feel comfort when seeing it displayed,” Finn announced Tuesday.

“I’m also grateful for the community’s understanding of the difficult but important decision. … This move … puts the Nativity in a more visible location within our city, while respecting the public nature of public property,” he added.