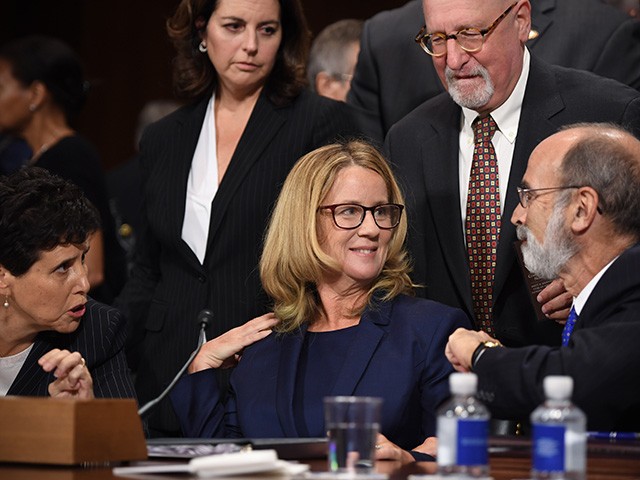 Christine Blasey Ford, the California psychology professor who leveled allegations of teenage sexual misconduct against Supreme Court nominee Brett Kavanaugh, said she does not know who paid for a polygraph examination regarding the incident while testifying before the Senate Judiciary Committee Thursday.

Blasey Ford told prosecutor Rachel Mitchell Thursday afternoon that she did “not yet” know who paid for the polygraph exam she underwent on August 7, one week after her allegations against Kavanaugh reached Sen. Dianne Feinstein (D-CA).

In this exchange, Mitchell asked whether Ford recalled who had paid for the polygraph exam:

MITCHELL: Did you pay for the polygraph yourself?

MITCHELL: Do you know who paid for the polygraph?

Mitchell also asked why Jerry Hanafin, the polygraph administrator, did not conduct the examination in his Virginia office, rather at a hotel next to Baltimore–Washington International Airport. “I had left my grandmother’s funeral at that point at Fort Lincoln Cemetery that day and I was on a tight scheduled to get to make a plane to Manchester, New Hampshire,” Ford told Mitchell. “He was willing to come to me, which was appreciated.”

Mitchell followed up, “So you were administered a polygraph on the day that you attended your grand mother’s funeral ?”

“Correct, or it might have been the next day,” Ford replied.

In a hot mic moment, Ford then turned to one of her attorneys, Debra Katz, and said, “I don’t remember the exact day.”

Asked if she had ever been advised on how to take a polygraph or offered any “tips” regarding an examination, Ford said she had not. She said that while she was “scared” to take the test, she believed it would accurately gauge whether her responses were truthful.

“I didn’t expect it to be as long as it was going to be,” she added. “It was a little bit stressful.”