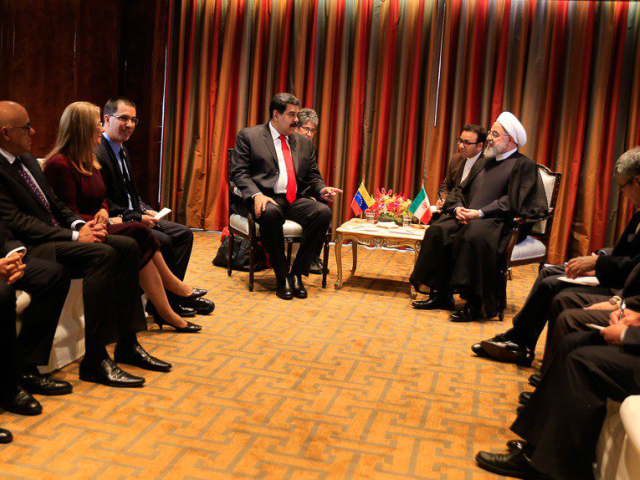 Maduro, who made a surprise appearance at the meeting after previously expressing concerns over his security, held meetings with the some of the few countries still supportive of his regime. Venezuela has held close relations with Iran since the days of Hugo Chávez and both countries now share the similar struggle of dealing with economic sanctions imposed by the United States.

“I have held a warm meeting with our brother President of the Islamic Republic of Iran, Hásan Rohaní,” he wrote of his meeting with the Iranian leader. “We agreed to strengthen our ties of friendship and cooperation in defending a multipolar world as a guarantee of peace.”

The 55-year-old despot also met with Russia’s foreign secretary Sergei Lavrov amid warming diplomatic and military relations with Putin’s regime as it seeks to expand its influence in Latin America.

“Held an important meeting with the Minister of Foreign Affairs of the Russian Federation, Sergey Lavrov,” he wrote. “It brought with it, signs of friendship and solidarity of the [President] Vladimir Putin to strengthen the common ties and goals of both nations.”

During his address, Maduro blamed Washington for the problems currently faced by his country, which is currently the experiencing the worst economic and humanitarian crisis in its history after near two decades of socialist rule.

“We are suffering permanent aggression by the media,” Maduro declared. “They are trying to build a dossier to justify an international intervention. The oligarchies of the continent — and those who rule them from Washington — want political control of Venezuela.”

Thousands of people are fleeing the country every day in need of humanitarian assistance.  As such, the United States and other regional allies such as Colombia and Canada have refused to rule out a military intervention to oust Maduro, whose support for terrorist groups such as Hezbollah and the Islamic State.

Maduro also spoke of his recent unsuccessful assassination attempt, describing it as “the most serious attack our country has seen in its political history because of its implications.” He later invited the United Nations and the FBI to investigate the attack “and discover the truth.”

Earlier in the week, President Donald Trump addressed the assembly on the issue of Venezuela, blaming socialism for the country’s woes and suggesting Maduro could be “toppled very quickly” by an internal military coup.

“We ask the nations gathered here to join us in calling for the restoration of democracy in Venezuela,” Trump said. “It’s a regime that, frankly, could be toppled very quickly by the military if the military decides to do that. It’s a truly bad place in the world today.”

His remarks also came hours after the Treasury imposed additional sanctions on Maduro’s wife Cilia Flores and other high-ranking Venezuelan officials, seizing all their U.S.-based assets and banning all Americans from dealing with them in any financial capacity.