The editor of China’s state-run Global Times said on Friday that President Donald Trump has “paid the price for his gamble to play down [Chinese coronavirus]” following the positive diagnosis of he and first lady Melania Trump and speculated that his diagnosis might “negatively affect his re-election.” 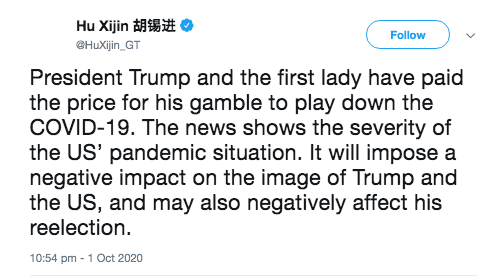 Hu deleted the post shortly after publishing it and receiving widespread criticism. Shortly after his tweet, the Foreign Ministry’s official spokeswoman, Hua Chunying, weighed in with a much more sympathetic message about the news.

Saddened to learn #President and the #FirstLady of the #US tested positive. Hope they both have a speedy recovery and will be fine.

The Global Times itself speculated in an editorial on Friday that testing positive might actually help Trump politically, an idea Chinese propagandists might have picked up by monitoring left-wing social media in the United States. The message contradicts Hu’s original statement:

US President Donald Trump’s positive test result for ”the SARS-CoV-2 virus” will possibly favor him if he recovers before the election, as it makes him the sole focus of the US political circle as the election date looms only one month away. In addition, it will help him silence the voices of others, Chinese observers predicted, noting the infection may help Trump better control the “narrative.”

Chinese followers of the situation said the US president’s contraction of the deadly novel coronavirus, which comes hot on heels of what has been dubbed “the most chaotic” presidential debate in history, alongside the fact that the US now tops the world in terms of confirmed coronavirus cases, make sure that this election year truly is the “most absurd in US history.”

The Global Times quoted a Chinese academic fretting that Trump’s diagnosis will probably cancel the remaining two presidential debates, so “voices from Joe Biden, Trump’s Democratic rival, will be silenced, exerting a heavy blow on the Democratic Party.”

“What’s more, the situation will favor Trump if he recovers before the election, as some swing voters will likely show sympathy toward him,” the analyst added.

Other Chinese experts said it was unlikely Trump’s coronavirus diagnosis will prompt cancellation or postponement of the U.S. presidential election and predicted the vice presidential debate between incumbent Mike Pence and challenger Kamala Harris will proceed as planned, since neither of them have tested positive.

“Experts said if Trump’s situation deteriorates, Pence will take over his job; and if Pence also tests positive for the virus, losing the ability to carry on working, the president’s work will be handed to Nancy Pelosi, speaker of the House of Representatives,” the Global Times wrote.

The Chinese Communist paper concluded by jumping on the American Left’s bandwagon of celebrating Trump’s diagnosis as a well-deserved blast of coronavirus karma:

Trump’s positive test result quickly renewed many Chinese netizen’s memories of Trump’s “laissez-faire” attitude toward virus control and mask wearing, which have been proven by the WHO [the World Health Organization] as effective methods to reduce the spread. He even mocked Biden for wearing a mask during the first presidential debate on September 30.

His constant claims that he “knows better than anyone” about the virus has also won him the nickname “Dongwang”  ̶ the King of I-know-it-all ̶  in China. The topic of Trump and his wife’s positive test results had attracted more than 230 million views on Sina Weibo, China’s Twitter-like platform, within one hour.

The BBC noted on Friday that some other global media outlets reported Trump’s diagnosis as some form of micro-organic justice for his “botched” or “catastrophic” handling of the pandemic. Oddly enough, some of the more restrained reporting came from Iranian media, which merely chided Trump for being “somewhat cavalier about the [Chinese coronavirus] threat” and declaring it was “only a matter of time” before he caught the virus.