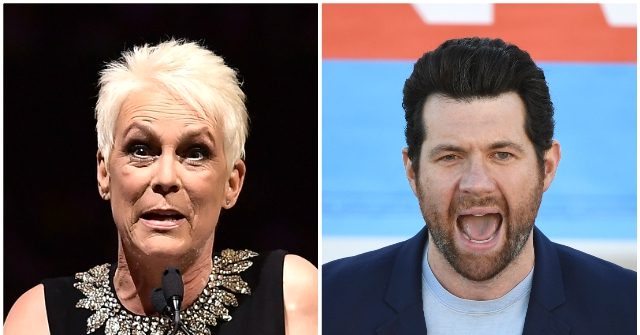 Left-wing Hollywood elites could barely contain themselves following President Donald Trump’s disclosure that he and first lady Melania Trump tested positive for the coronavirus. Celebrities eagerly piled on, calling the diagnosis “karma” and telling the president that “you’re a vile human being” and that “you should’ve worn a fuckin’ mask.”

President Trump has in fact worn masks on numerous occasions. Celebrities also used the news as an opportunity to revive the debunked claim that President Trump called the coronavirus a “hoax,” when in reality the president used the word “hoax” to refer to Democrats’ politicization of the pandemic.

President Trump revealed early Friday that he and and the first lady tested positive for COVID-19. “We will begin our quarantine and recovery process immediately. We will get through this TOGETHER!” he tweeted. The president earlier said that White House senior counselor Hope Hicks had tested positive for the virus, prompting the first couple to get tested.

First lady Melania Trump tweeted: “We are feeling good & I have postponed all upcoming engagements. Please be sure you are staying safe & we will all get through this together.”

Hollywood stars used the news to tackle the president and the first lady.  The West Wing star and left-wing activist Bradley Whitford called the president a “vile human being.” He added: “If @realDonaldTrump had simply acknowledged science and been as concerned about public safety as @JoeBiden has been, none of this would have happened.”

If @realDonaldTrump had simply acknowledged science and been as concerned about public safety as @JoeBiden has been, none of this would have happened. This is is what disturbed people do. They crate chaos. Vote him out.

Rob Reiner and singer Diane Warren were among several celebrities attempting to revive the debunked claim that the president once called the coronavirus a “hoax.”

U tested positive for a hoax??

Filmmaker Judd Apatow tweeted, “He chose death.” He added that responses to the president’s announcement “should be turned into a book with the money going to people hurt by you and your policies.”

They will let anyone die.This is murder. Call it what it is. It isn’t sloppiness. It isn’t a lack of belief in science. It is killing people because they believe it will somehow help them achieve their goal of not losing power and being held accountable. This is mass murder. https://t.co/F4iywNeYgx

The responses to this tweet should be turned into a book with the money going to people hurt by you and your policies. https://t.co/E76CoEvPKP

He did not “fail” in dealing with the virus. He made a conscious political choice to let tens of thousands of people who would not have died if he wasn’t focused on his attempt to look good and stay in power. He chose death. https://t.co/ZIklVCCLNt

Tonight will reveal where we all think the line is comedically.

Jamie Lee Curtis urged people to “not stoop to [Trump’s] level” by gloating about the news.

Democrats. Do not stoop to his level. Do not be happy about anyone getting this virus that has killed 2,000,000 people world wide. Just wish then well then VOTE not GLOAT them out of office.

Seinfeld writer Larry Charles speculated without evidence that Trump may have known he had the virus during the first presidential debate. “Did he hope he would infect Biden?” (Trump and Biden didn’t shake hands during the debate and maintained proper social distancing from each other during the entire event.)

One salient fact we know, Trump is a liar. But ok, let’s assume he really does have it. When did he know? Did he know at the debates? Did he hope he would infect Biden?

I hope this changes the discourse around this virus among the people who follow him and don’t give a damn. And in turn, who damn the rest of us. People have lost their lives. Their loved ones. And this man has never taken it seriously. Never shown care, concern. Maybe now. Maybe.

Does anyone know why @Mike_Pence is running around in circles, throwing little pieces of Wonder bread in the air?

Actor Armie Hammer offered one vile line, saying “I like the presidents who DON’T get covid.”

Chelsea Handler cracked a joke involving Kimberly Guilfoyle. She later said “thoughts and prayers,” along with a photo go her sitting and smirking.

Maybe Donald Trump can get some convalescent plasma from Kimberly Guilfoyle.

Actor Jeffrey Wright pondered about the “spittle that must’ve flown from [Trump’s] mouth during that debate.”

Fuck, man. No shaking hands but the spittle that must’ve flown from his mouth during that debate. Unreal. Unreal. When did he contract it? Wow. Wow.

They will have access to every medical support and intervention imaginable. I just hope I don’t have to hear later “it’s just a bad flu”.

Actress Kristen Johnson and actor Zach Braff implied that the president’s diagnosis could be a political ploy.

Is this what they mean by “October surprise”?

Comedian and The Daily Show correspondent Jaboukie Young-White questioned why people are praying for the president when “children keep dying of the flu in ICE detention centers.”

Omg and I blew Mike Pence like nine times this week!!!

To those of you rejoicing or wishing ill upon the president, may God have mercy on your…what’s that? He openly mocked mask wearing during a debate after 200 thousand Americans he swore to protect and defend died on his watch? As you were.

Modern Family producer Danny Zuker tweeted, “In this difficult time let’s be sure to show @realDonaldTrump the respect he’s shown others.”

In this difficult time let’s be sure to show @realDonaldTrump the respect he’s shown others.

Hey @realDonaldTrump maybe you should’ve worn a fuckin’ mask. Or better yet, not lied to all of us and let so many people needlessly die. #trumpkarma

You may want to quarantine until after Christmas, sweetheart. https://t.co/4oNPtqsZPX

A slew of other celebrities joined the Hollywood pile-on, including actor Bill Eichner, who said “This man let over 200,000 Americans die in the last 6 months, INTENTIONALLY withheld life saving information from us, lied and downplayed the virus until hundreds of thousands of innocent people were DEAD. Fuck these monsters. Blood on their hands forever. VOTE THEM OUT!!!”

This man let over 200,000 Americans die in the last 6 months, INTENTIONALLY withheld life saving information from us, lied and downplayed the virus until hundreds of thousands of innocent people were DEAD. Fuck these monsters. Blood on their hands forever. VOTE THEM OUT!!!

How fake is it now?

I don’t think it’s a lie. Calling something a hoax for 6 months and then getting it is not a good strategy.

In Forest Gump 2 he gives the President the novel coronavirus by sneezing on a quarter pounder. Snoop Dogg sees it happen & winks at the camera

#TrumpHasCovid but Biden wears a mask.

Wow. My antifa meeting in the morning is gonna be WILD

Some Hollywood figures showed a modicum of class by either expressing sympathy or wishing for the best for the president and his family, including Patricia Arquette, Diedrich Bader,

As many problems as I have with Trump I hope he didn’t catch Covid.

Wow
I hope he and the First Lady speedily recover https://t.co/xDLmB3h8Tq