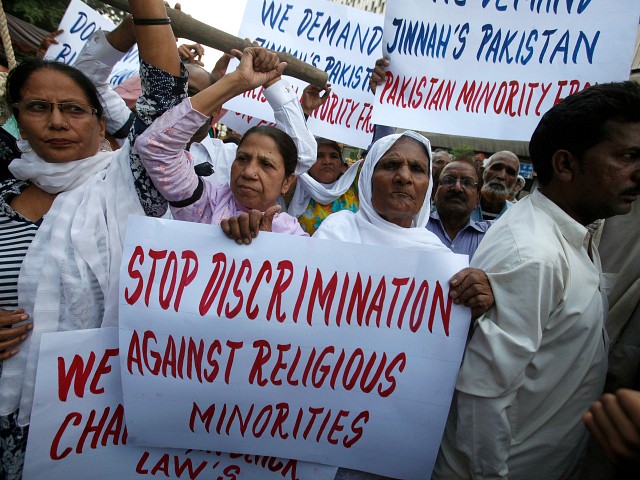 U.S. Secretary of State Mike Pompeo announced the 2018 list of Countries of Particular Concern under the International Religious Freedom Act of 1998 on Tuesday, listing China, Pakistan, and Saudi Arabia at the top of the list of the world’s worst abusers of religious rights.

Other nations designated under the act include Burma, Eritrea, Iran, North Korea, Sudan, Tajikistan, and Turkmenistan. The designation, the State Department explained, means that these countries engage in “systematic, ongoing, [and] egregious violations of religious freedom.”

In an explainer on the State Department’s website, the agency notes that once a country finds itself on this list, “an economic measure generally must be imposed.” As the list was made public only this week, the specific economic repercussions for the countries listed remain unspecified at press time.

The International Religious Freedom Act also allows for the State Department to name countries to a “Special Watch List,” warning that they may soon find themselves designated as “Countries of Particular Concern.” The countries named this year are Comoros, Russia, and Uzbekistan.

The State Department also designated a variety of jihadist groups, including Yemen’s Houthi rebels, as “Entities of Particular Concern.” The Houthis, who overran the Yemeni capital of Sana’a in 2015 with aid from Iran, are a Shiite jihadist movement whose motto is “God is great, death to America, death to Israel, a curse upon on the Jews, victory to Islam.”

“Safeguarding religious freedom is vital to ensuring peace, stability, and prosperity,” Pompeo said in a statement accompanying the announcement. “These designations are aimed at improving the lives of individuals and the broader success of their societies. I recognize that several designated countries are working to improve their respect for religious freedom; I welcome such initiatives and look forward to continuing the dialogue.”

In a press briefing on the designations on Tuesday, United States Ambassador-at-Large for International Religious Freedom Sam Brownback explained that, in large part due to state-coordinated human rights violations, “80 percent of the world’s population lives in a country where there’s some type of religious freedom restrictions, in some cases very significant.”

“The ones – the countries we’ve listed today are the most egregious violators of religious freedom around the world,” Brownback affirmed.

The situation for people of all faiths in China “is one of the just really worst human rights situations in the world,” Brownback explained, particularly signaling to the use of concentration camps to exterminate the nation’s Muslim Uighur minority. China began building these camps, which it calls “vocational centers,” within the past two years, and have constructed between 44 and 1,200 facilities to torture and indoctrinate Uighur people, according to widely ranging estimates. Those who have survived the camps say they are beaten, electrocuted, and forced to undergo other forms of torture while singing Communist Party slogans and pledging full allegiance to Communist Party leader Xi Jinping.

“Reports of 800,000, up to 2 million detentions in the western part of China of Uighurs, but also ethnic Kazakhs and other ethnic groups in the region that have generally a Muslim-based population,” Brownback explained. “China isn’t backing away from the religious persecution; it seems to be expanding. This is obviously very troubling to the administration.”

He noted also that Christians and Tibetan Buddhists suffer significantly at the hands of the Chinese government. This weekend, China raided the Early Rain Church in Chengdu, a Protestant congregation, and arrested over 100 of its members, including its pastor. The church is not a part of the Communist Party’s “Patriotic” church, making it illegal. The pastor’s whereabouts remain unknown.

China has not directly responded to the designation. On Wednesday, however, the Chinese regime published a “white paper” absolving itself of all human rights crimes.

“China has showed respect for, protected and promoted human rights in the course of reform and opening up, blazing a trail of human rights development that conforms to the national conditions, and created new experiences and made progress in safeguarding human rights,” the white paper reads.

Pakistan, as a first-time member of the “Countries of Particular Concern” list, issued a much more energetic rejection of the “politically motivated” label.

“Pakistan does not need counsel by any individual country how to protect the rights of its minorities,” the Pakistani Foreign Office said in a statement Wednesday.

“It is time for the U.S. to take responsibility for its failures in Afghanistan … and if it is serious about religious freedoms then it needs to examine the record of [Prime Minister Narendra] Modi’s India and some of its E.U. allies,” the statement read in part. Mazari also noted that “diverse denominations of Christian churches are present in Pakistan” without mentioning that they are under an almost constant threat of terrorist attack by various jihadist groups in the country.

Brownback cited Pakistan’s blasphemy laws, which include a provision mandating the death penalty for anyone convicted of insulting Muhammad, as a major reason for its presence on the list.

“In the world’s population of people that are in prison for blasphemy, half of them are in Pakistani prisons,” he noted, adding also that “the government often fails to hold accountable perpetrators of killings and violence against members of religious minorities targeted on account of their religious beliefs or affiliations.”

Brownback cited the case of Asia Bibi as one of the most egregious. Bibi, a Roman Catholic, spent nearly a decade in prison after being falsely accused of insulting Muhammad. Last month, Pakistan’s Supreme Court ordered her immediate release, condemning her accusers as blasphemers themselves for their lies.

The case triggered widespread Islamic riots nationwide, forcing businesses and schools to close. To appease the rioters, the federal government allowed an extraordinary appeal on the Supreme Court’s decision. Bibi remains in hiding in an undisclosed location at press time.