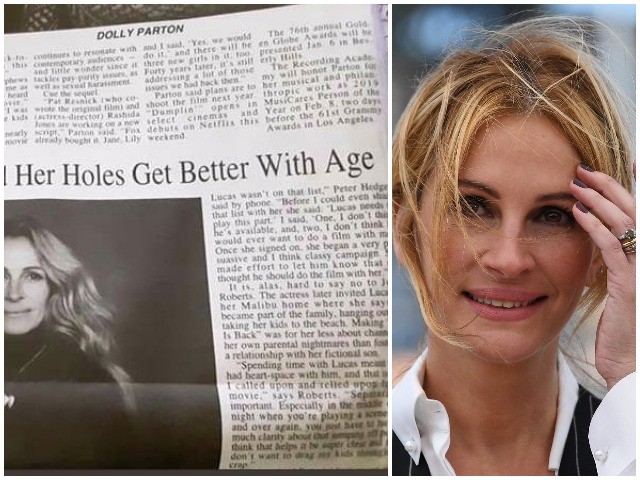 A small newspaper in Western New York apologized for making a big mistake in a headline about actress Julia Roberts.

The Post-Journal, a newspaper based in Jamestown, New York, published an AP wire story with the serialized headline, “Julia Roberts Finds Life And Her Holes Get Better With Age” Saturday.

Never dictate the headline over the phone. (h/t @NeilMcMahon) pic.twitter.com/0kPUGxQ2sd

The paper has now corrected the error, saying, “A headline on Page D4 in Saturday’s Post-Journal should have read ‘Julia Roberts Finds Life And Her Roles Get Better With Age.’” However, the paper offered no explanation for how the headline reading “Holes” and not “Roles” was printed. For what it’s worth, the “R” and “H” are not immediate neighbors on a standard keyboard.

Social media users, of course, had a good laugh over the typo.

“Julia Roberts Finds Life And Her Holes Get Better With Age” pic.twitter.com/uCJyGw6Uh4

I feel this title about Julia Roberts and Holes perhaps needs a little finessing pic.twitter.com/z2o7EmJKbk

Roberts stars in the new drama Ben is Back, playing a mother whose drug-addicted son returns home for Christmas.

The film has already generated mostly positive reviews, with Roberts’ own acting being complimented as the best part of the film.

The 51-year-old actress has stood out as one of the few female actresses to maintain her fame as she ages. In 2017, she was named People Magazine’s “World’s Most Beautiful Woman,” an honor she previously won when she was 23 after starring in the fame-making hit film Pretty Woman.