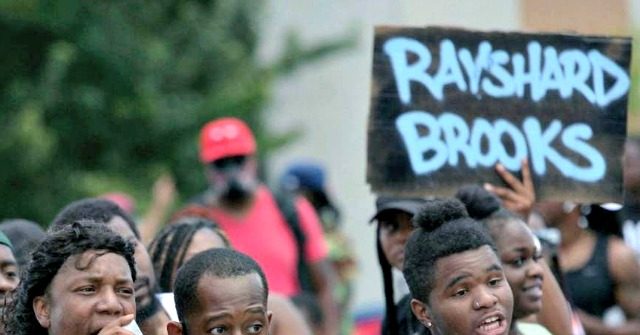 Chaos erupted in Atlanta on Saturday evening following the death of 27-year-old Rayshard Brooks, who was fatally shot by police following an incident in a Wendy’s parking lot on Friday.

According to the Georgia Bureau of Investigation, authorities on Friday responded to a complaint of a male in a vehicle “parked in the drive thru asleep, causing other customers to drive around the vehicle.” Authorities had the man perform a field sobriety test, which he failed. Thereafter, officers tried to take the man into custody, but he “resisted and a struggle ensued,” causing an officer to deploy a taser, which the male subject “grabbed and was in possession of.”

“It has also been reported that the male subject was shot by an officer in the struggle over the Taser,” GBI’s statement on the incident detailed, providing another update on Saturday which affirmed “new videos” that “indicate that during a physical struggle with officers, Brooks obtained one of the officer’s Tasers and began to flee from the scene.”

“Officers pursued Brooks on foot and during the chase, Brooks turned and pointed the taser at the officer. The officer fired his weapon, striking Brooks,” GBI said.

Brooks was transferred to the hospital, where he died after surgery. GBU stated that a copy of the video will be released to the public.

Rioters flocked to Atlanta streets on Saturday in protest, blocking highways and setting fire to the Wendy’s, where the incident occurred:

Wendy’s continues to burn, now it’s on fire from the outside. A live report moments away on @FOX5Atlanta pic.twitter.com/w2RSlXg6Ie

Well that is done, the @Wendys is burning. #skyfox5 has shots of the drive thru is on fire. #fox5atl #AtlantaShooting #RayshardBrooks #protest2020 pic.twitter.com/Ak0Z1h6yuA

Protesters at the @Wendys that #RayshardBrooks was shot in front of. The interstate is #shutdown and fires have been set. #atlprotests #fox5atl #BlackLivesMatter pic.twitter.com/utZX0PgMzi

There goes @Wendys on University Ave.

I had to step away for my own safety but here is a look at rioters right before they lit a firework in the Wendy’s where #atlantapolice shot and killed #RayshardBrooks @FOX5Atlanta pic.twitter.com/rR0XdDkaBk

#UPDATE Police and fire just arrived at Wendy’s which is steadily blazing from the inside @FOX5Atlanta https://t.co/5GyvNd39BR pic.twitter.com/4YS1wSkNbB

#BREAKING Protesters have shut down I-85 near University ave, the highway that stretches over the Wendy’s where #RayshardBrooks was shot and killed @fox5atlanta pic.twitter.com/UxzLzpF5Ym

RIGHT NOW: Protesters are climbing up a hill and onto the interstate. The situation escalated when someone vandalized an #apd cruiser and police deployed tear gas @FOX5Atlanta #RayshardBrooks pic.twitter.com/HDMpKf7O7w

“Out of a deep and abiding love for this City and this department, I offered to step aside as police chief,” she said in a statement. “I have faith in the Mayor, and it is time for the city to move forward and build trust between law enforcement and the communities they serve.”

Mayor Keisha Lance Bottoms (D) on Saturday called for the firing of the officer who shot Brooks:

“I do not believe this was a justified use of deadly force,” Bottoms stated.