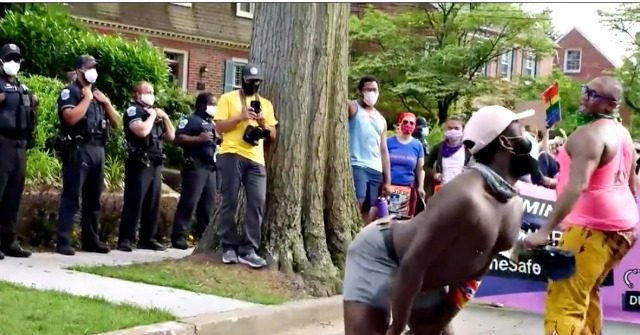 The demonstrators marched on the street of the mayor’s home on Saturday and engaged in a series of chants, from “fuck 12,” to “Black Lives Matter,” to “no justice, no peace, no racist police.”

They seemingly settled in front of Bowser’s home, as a line of police officers stood on the sidewalk. Demonstrators could be seen displaying banners reading “Defund MPD,” “No Pride in Police Violence,” and “Decriminalize Sex Work” as music played in the background. At one point, some of the activists began dancing and twerking in front of the police officers as the crowd emphatically cheered them.

Bowser has overwhelmingly stood by protesters in recent weeks, even touting the city painting “Black Lives Matter” on 16th Street NW leading up the White House and deeming it “an affirmative piece of art”:

“We certainly are very proud of the D.C. mural that we commissioned in our Department of Public Works and local artists installed,” the mayor said during last week’s appearance on ABC’s This Week.

“It is an affirmative piece of art, a centering piece of art where people from around the globe have called us and thanked us for acknowledging black humanity and black lives in the most important city in the world, and we are very proud of that art,” she added.

Bowser also announced last week that the portion of 16th street near the White House is “now officially ‘Black Lives Matter Plaza’” — another show of support for the protesters:

The section of 16th street in front of the White House is now officially “Black Lives Matter Plaza”. pic.twitter.com/bbJgAYE35b

However, the show of solidarity fell short, as demonstrators later took to the streets to paint “Defund The Police” —  one of the main demands of Saturday’s twerking protesters — on a street leading up to the White House.