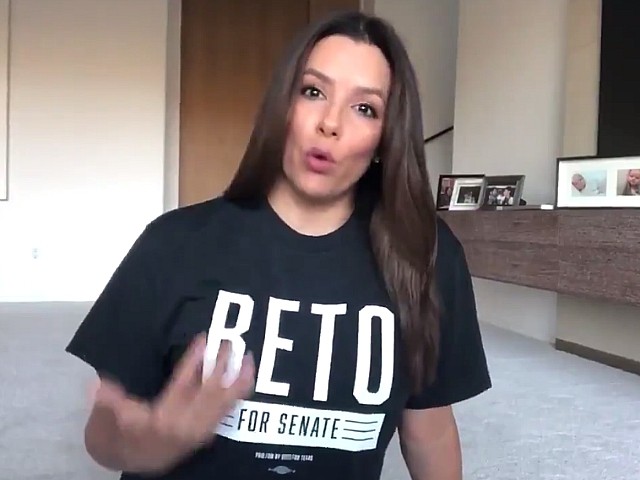 Actress Eva Longoria is the latest Hollywood elite to jump onboard Texas Democrat Beto O’Rourke’s campaign for Senate in Texas.

The Desperate Housewives star sported a “Beto for Senate” shirt in a video shared to Twitter over the weekend, in which she praised the candidate for claiming he would “fight for our children.”

“There is so much at stake this November, especially for our Latino community,” Longoria said in her video. “Our state is going to respect our values if we show up and vote.”

“My story and my success are signs that the American dream can work – that hard work and education can be rewarded,” she continued. “And that this idea can work for Latinas like me and you,” she added.

“Beto believes in us,” Longoria concluded. “He supports us. He supports health care for all. He’s going to fight for our kids’ future and invest in our public school systems so that every kid can succeed.”

Beto O’Rouke, who has not suffered from a lack of support from Hollywood, recently welcomed the endorsement of country crooner Willie Nelson. The “Always On My Mind” singer hosted a fundraiser for the Democrat late in September.