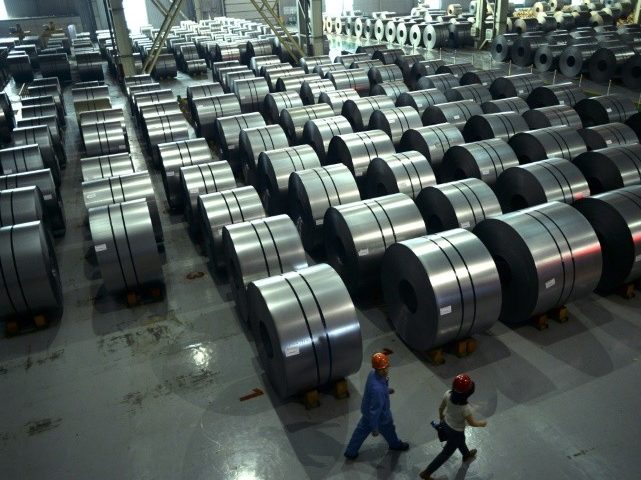 President Donald Trump’s tariffs on imported steel and aluminum are not costing American jobs as free traders had claimed they would, a new report by Bloomberg Businessweek admits.

For the last year, free trade organizations, the Chamber of Commerce, and the establishment media has claimed that Trump’s 25 percent tariffs on imported steel and ten percent tariff on imported aluminum would cost hundreds of thousands of jobs.

This year, the free trade apparatus claimed that there would be 430,000 American jobs wiped out by Trump’s tariffs. Now, free traders admit that the tariffs have not cost the U.S. any jobs.

A Bloomberg Businessweek report by Peter Coy notes that not only have Trump’s tariffs on imported metals not cost Americans their jobs, but they have also actually had the opposite impact, spurring job growth in the metal industry and manufacturing.

Employment in metal-using industries has risen since the tariffs went into effect last spring. Employment in fabricated metals products rose 1.44 percent from April through September, according to the jobs report from the Bureau of Labor Statistics released on Oct. 5. [Emphasis added]

That compares favorably with the increase for overall manufacturing (0.70 percent) and the overall private sector (0.76 percent). In the machinery sector, another big consumer of metal, jobs increased by 1.29 percent over the period. [Emphasis added]

Nonetheless, free traders continue to claim that the job gains have no correlation to Trump’s tariffs and are, instead, a result of the Republican-passed tax cuts. They claim that these economic gains will eventually be crushed by the tariffs, though that has yet to occur.

Trade blogger Alan Tonelson notes that the most recent jobs figures for September once again disprove the claims made by free traders, writing that the data “expose as nonsense the long string of news reports claiming that President Trump’s metals tariffs are already causing tremendous damage to American domestic metals-using industries.”

Trump’s tariffs, as Breitbart News reported, created more than 11,000 American jobs in the economy in the last six months, according to research by the Coalition for a Prosperous America. This means that there are 20 times as many American jobs that have been created thanks to Trump’s tariffs on imported foreign goods than jobs that have been lost.

Since 2001, free trade with China has cost millions of Americans their jobs. Between 2001 and 2015, about 3.4 million U.S. jobs were lost due to the country’s trade deficit with China, Breitbart News reported.

Of the 3.4 million U.S. jobs lost in that time period, about 2.6 million were lost in the crippled manufacturing industry, making up about three-fourths of the loss of jobs from the U.S.-Chinese trade deficit.