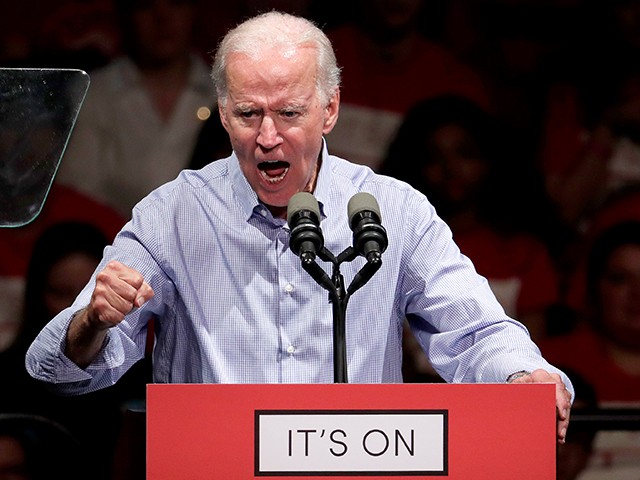 Former Vice President Joe Biden predicted on Saturday that if Democrats take back Congress, there will be plenty of Republicans in the House and Senate who will join Democrats and vote “their conscience” against President Donald Trump.

At a Las Vegas, Nevada, campaign rally for  Senate candidate Rep. Jacky Rosen (D-NV), Biden said “this election is bigger than politics” and Democrats have to take back Congress so Trump does not abuse his power. Biden added that voters, regardless of how old or young they are, “never have participated in an election that is as consequential as this election.”

“That’s why we gotta win,” Biden said, insisting that some Republicans in Congress are ready to join Democrats to vote against Trump and his agenda.

Though Biden said earlier in the week that he hoped Democrats, if they take back the House, do not start impeachment proceedings against Trump before Special Counsel Robert Mueller has released his report, many Democrats are holding out hope that some Republicans will join their impeachment crusade if Democrats have a big enough House majority. In addition, some pro-amnesty advocates have in recent weeks indicated that there could be just enough GOP Senators who could support a potential amnesty compromise if Democrats make big gains in Congress in November.

Biden, who will make a decision about his 2020 candidacy after the midterms, predicted that if Democrats take back the House and the Senate, “somewhere between 15 and 20 Republicans in the House” will “vote their conscience when they know it could matter and they can win.”

The former vice president also predicted that “three and six Republicans in the Senate” will “vote the right way” as well.

“They don’t want to be the only guy out their on the deciding vote,” Biden said. “If they know the consensus in the body is to do the right thing, they will join.”

Biden, sure of his prediction, even told reporters to not forget his words.

“Remember I said it,” Biden said.