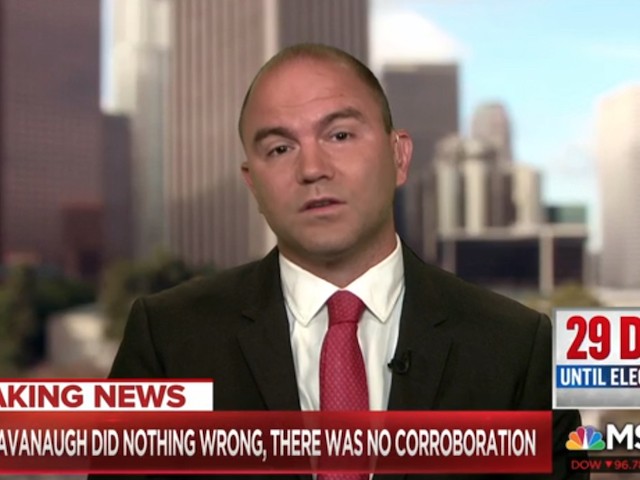 Rhodes said, “I think it just shows you how dishonest and disingenuous their initial comments were after Dr. Ford came forward when they were bending backwards to say they wanted to hear from her. Now you have people like Senator Collins saying well, she was sexually assaulted, but it wasn’t Brett Kavanaugh with no basis for her to make that assertion. Now you have President Trump is essentially insulting every survivor in this country and frankly sending a message that people shouldn’t come forward by saying it was made up. He’s showing his true colors.”

He added, “These midterm elections are always dominated by the energy in opposition to the party that is in power. That is Donald Trump, and that’s not going to change because of what’s happened.”

He continued, “It’s important Democratic voters feel like their energized to come out and vote for Democrats. If the Democrats are constantly trying to tack themselves off the Republicans and have a national message designed to protect one red state Senate race, they’re not going to energize the base of voter they need to take back the House. That’s the main event in the midterm election. I think the fact that Democrats supported survivors and held Kavanaugh to account and frankly revealed him to be the rabid partisan he is, that is what voters need to see to get energized to come out and vote for Democrats. Either because they want a different alternative to President Trump or even if they are sympathetic to Trump they want to make sure there’s a check in a divided government.”

On Taylor Swift endorsing Democrats, Rhodes said, “I don’t think one celebrity makes that big a difference. What I do think it might represent, though, that’s more important, is women voters. You know, younger women voters turning out in bigger numbers. Frankly, white women swung the election to Donald Trump in 2016. And contrary to what Mitch McConnell is saying and a kind of Washington parlor game, I think you see in the number of people running who are women on the Democratic side, the survivors who are coming forward, the Women’s March. I think we could be surprised at the scale of the turnout among women including younger women in this country in the midterm elections. I think it’s more interesting to me that she’s coming forward as a woman and making those points than coming forward as a celebrity. Because I think that’s part of the trend, we’re seeing in our national politics.”