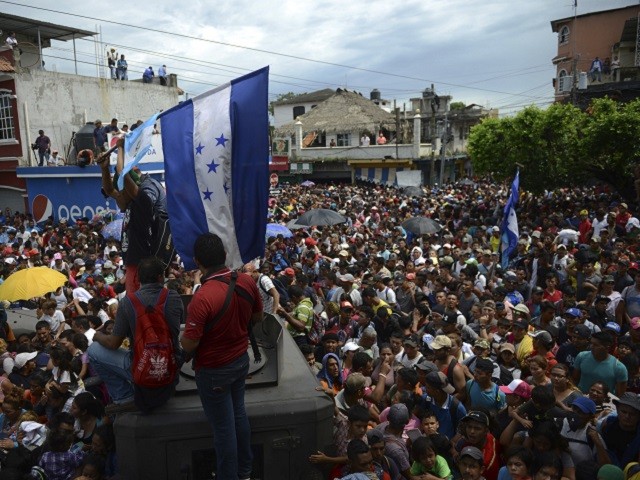 A group of American Catholic sisters issued a statement Tuesday telling Honduran migrants marching toward the U.S. border they are “welcome here” while blaming U.S. policy for creating the migrant crisis.

In their October 30 statement, the Leadership Conference of the Sisters of Mercy of the Americas said that rather than blaming the victims “we call for reflection on how failed U.S. economic and security policies, as well as its militarized approach to the war on drugs, have fueled the violence and misery from which people are running for their lives.”

“Decades of U.S. interventions in El Salvador, Guatemala and Honduras have included military support, political pressure and financial assistance to prop up elites and support repressive governments,” the sisters alleged.

While noting their disdain for the United States’ “current administration,” the sisters suggest that the Obama administration lent its support for a 2009 coup that worsened the situation in Honduras for ordinary citizens.

“In Honduras, where the caravan originated, the U.S. supported the 2009 coup, which opened the country to organized crime and drug cartels,” the sisters stated. “The United States continues to provide military and police support for a government accused of massive human rights abuses and repression, which worsened after their election in November 2017.”

Last week, the Bishops of Honduras released their own statement, confessing that Church leaders in Honduras have been “deaf” and “blind” to the needs of their people while calling on the Honduran government to address the “human tragedy” of the migrant caravan.

“It is a shocking reality, caused by the current situation in our country,” the bishops declared, “which forces a multitude to leave what little it has, venturing without any certainty for the migration route to the United States, with the desire to reach the promised land, the ‘American dream.’”

While accepting blame for not having acted effectively, the bishops said that the crisis was caused by a failure on the part of the Honduran government.

“It is the duty of the Honduran State to provide its citizens with the means to satisfy their basic needs, such as decent, stable and well-paid work, health, education and housing, and when these conditions do not exist, people are forced to live in tragedy,” they declared.

Over the past year, the highest-ranking prelate in Honduras, Cardinal Oscar Rodriguez Maradiaga, has come under fire for a series of charges ranging from financial mismanagement and embezzlement of funds, to protecting a sexually abusive bishop, to covering up a homosexual “epidemic” in his diocesan seminary.

Maradiaga, the coordinator of the pope’s C9 council of cardinal advisers on curial reform who has sometimes been referred to as the “vice-pope” for his unparalleled influence in the Francis pontificate, was accused last December of receiving some $600,000 annually from the Catholic University of Tegucigalpa in 2015 in his capacity of Grand Chancellor of the university.

Under Maradiaga’s watch, his auxiliary bishop, Juan José Pineda, has also been accused of having “orchestrated reckless financial operations” and channeling Church money to friends.

The Italian weekly L’Espresso said that “huge flows of money” have been emanating from the cardinal’s “media empire” that runs the diocesan newspaper and television, as well as government money that was given to the Foundation for Education and Social Communication.