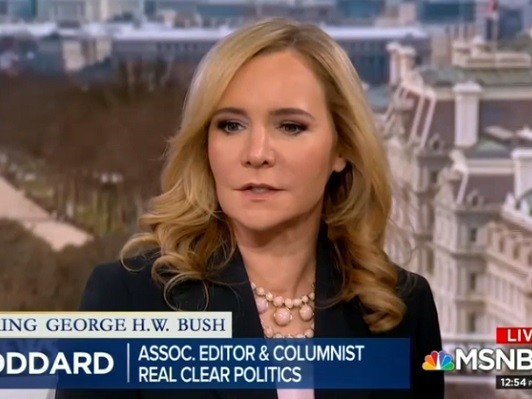 Monday on MSNBC’s special coverage of the death of former President George H.W. Bush, RealClearPolitics associate editor A.B. Stoddard said those in the Republican Party were acting like the children of alcoholic parents because they are “afraid of” President Donald Trump.

Stoddard said, “Right, what Jonathan points out and what these Republicans are talking about privately is a new delineation, a realignment that makes them the party of white men. This is a huge loss, the fact that women are so repelled by Trump in the suburbs, and moderate voters, and independent voters. A majority is not made by your base alone. And they took a beating across the board except for, largely, white men. The new conference, without their 40 either retired colleagues or defeated colleagues, is much more Trumpian and silent on this question, so they can’t have a debate about a course correction.”

She added, “Even though they know that this is where the Party’s headed. It’s an amazing moment. It’s like alcoholic children. You just laugh – of an alcoholic parent. You keep laughing, and you hide in your bedroom when it gets really bad. They will not address this, their leadership refuses to, and they’re afraid of Trump.”