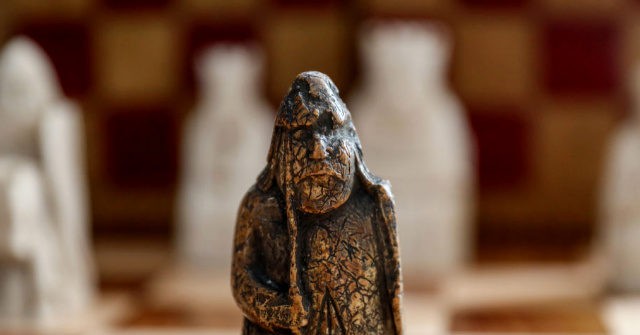 This particular figure — a “rook” — had been passed down through the family of the antique dealer who originally acquired the piece for a pittance. For a long time, it lay hidden in a drawer at the dealer’s daughter’s home.

The famed Lewis Chessmen are artifacts recovered from Scotland’s Isle of Lewis in 1831. Dozens of pieces were found there, but five went missing. This is the first of those missing pieces to be positively identified. Sotheby’s called it one of “the most famous chess pieces to have survived from the medieval world.”

The pieces are carved from walrus tusks, into the forms of Norse warriors. A total of 93 pieces are already preserved; 11 are in Edinburgh’s National Museum of Scotland, but the remainder — and vast majority — are kept in the British Museum of London.

The Lewis Chessmen inspired the pieces used in the giant game of chess portrayed by the film adaptation of Harry Potter & The Sorcerer’s Stone. Before the sale, Sotheby’s had estimated that the piece could have sold for as much as $1.26 million.