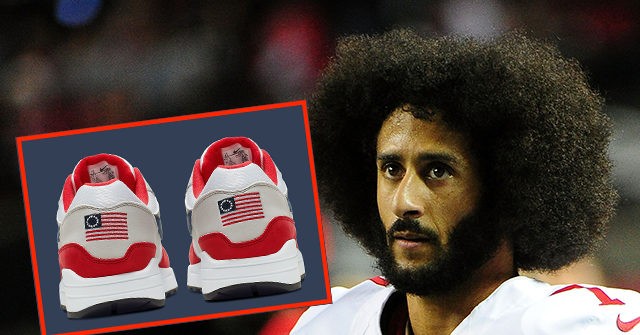 Rep. Mo Brooks (R-AL) says Colin Kaepernick, the former NFL player and the face of multinational corporation Nike, should leave the United States if he does not like the country.

This week it was revealed that Nike had ditched the production and sale of a pair of shoes that featured the famous flag created by Betsy Ross at the behest of former President George Washington because Kaepernick was offended by the emblem.

“After images of the shoe were posted online, Mr. Kaepernick, a Nike endorser, reached out to company officials saying that he and others felt the Betsy Ross flag is an offensive symbol because of its connection to an era of slavery, the people said,” the Wall Street Journal reported.

Brooks told SiriusXM Patriot’s Breitbart News Tonight that Kaepernick should leave the country if he does not like America.

“We’ve got some very radical people in the United States of America who don’t like America,” Brooks said. “They don’t like the foundational principles that have made us a great nation. And I would put Mr. Kaerpernick in that category.”

“For him to protest a shoe because it has an American flag on it is absolutely absurd,” Brooks continued. “In my mind, perhaps he ought to consider moving to a country where he believes the laws are better for his purposes. I doubt he will do that because in this country, we’ve had over a million Americans die fighting for our liberties … and one of those liberties is freedom of speech … and all of these things that we enjoy, he seems to frown upon. So I just assume he leaves.”

Brooks said patriotic Americans should “start boycotting companies like Nike” that are “embarrassed about the patriotism that has helped make America who we are.”

As Breitbart News has chronicled, Nike has a long history of outsourcing and gutting most of all of its American manufacturing and U.S. jobs to send them to foreign countries like Honduras, China, Vietnam, and Indonesia in order to cut labor costs, grow profit margins, and employ cheap foreign workers. Nike’s record of outsourcing American jobs is so deep-rooted that in 1997, Sen. Bernie Sanders (I-VT) took to the Senate floor to denounce the corporation for employing foreign slave labor over hiring Americans.

In 2017 alone, Nike laid off 1,400 American workers and sent their jobs to Honduras where it can hire workers for less than half the cost, according to some estimates. For more than three-and-half decades, Nike has employed most of its workforce in low wage Vietnam and China, rather than the U.S. For example, as of 2018, Nike had 46 percent of its products produced in Vietnam, where the yearly minimum wage is close to $1,000. About 27 percent of its products are made in China, where the average worker earns less than $5,000 a year.

In Beaverton, Oregon — where Nike headquarters remain — the district lost more American jobs to Chinese outsourcing than any other district in the state. In the last ten years, about 21,000 American jobs in the region have been outsourced to China by multinational corporations like Nike.

Kaepernick enjoys an estimated net worth of about $20 million.