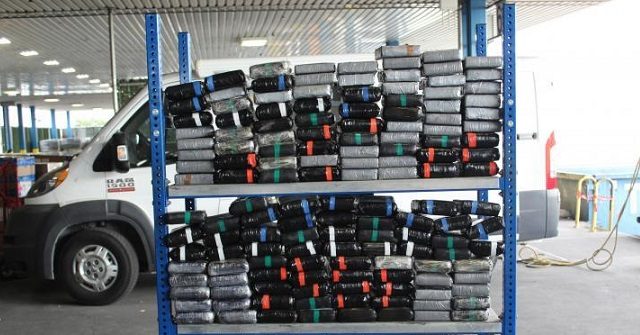 U.S. Customs and Border Protection officers in Laredo, Texas, seized more than 900 pounds of cocaine at a commercial border crossing checkpoint. The two separate seizures are estimated to be worth nearly $7 million, officials stated.

CBP officers assigned to the World Trade Bridge in Laredo on October 16 observed a tractor-trailer approaching for inspection for entry into the United States. The manifest indicated the driver was carrying a load of aluminum scrap. The officers referred the driver to a secondary inspection area where operators of a non-intrusive imaging system detected 135 packages they believed to be filled with drugs, according to information provided by Laredo Office of Field Operations officials. A K-9 also alerted to the possible presence of drugs in the trailer.

A physical search of the trailer cargo area led to the confirmation of the 135 packages of drugs. Officials identified the packages as being filled with 337 pounds of cocaine.

Later that day, officers working the same border crossing port of entry observed another tractor-trailer approaching for inspection. This driver also presented a manifest listing the load as aluminum scrap, officials stated. Officers referred the driver to a secondary inspection area where operators of the non-intrusive imaging system and a K-9 alert led to the discovery of additional packages of drugs.

Officers carried out a physical search of the cargo area and found 237 packages containing 567 pounds of cocaine. The officers seized the drugs and the tractor-trailer rig.

Officials did not disclose the nationality of the driver or what they did with them.

“Our frontline CBP officers utilize their training and experience along with our high-tech tools and that effective combination led to the seizure of $6.9 million in cocaine in the cargo environment,” said Acting Port Director Andrew Douglas, Laredo Port of Entry. “The ability to facilitate lawful trade and travel while maintaining a robust enforcement focus is a critical element to our border security mission.”

The total estimated value of the two cocaine shipments is $6,973,400, officials reported.