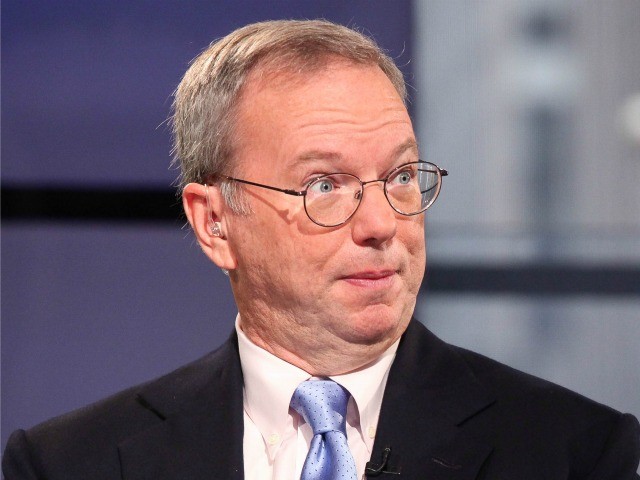 At a recent virtual conference hosted by the Wall Street Journal, former Google Chairman and Clinton lackey Eric Schmidt stated that he doesn’t believe that the tech giant is a monopoly as it doesn’t have 100 percent market share.

Bloomberg reports that during a recent virtual conference hosted by the Wall Street Journal, former Google chairman Eric Schmidt was asked a number of questions about the tech giant and the recent antitrust lawsuit filed against the firm by the Department of Justice.

Breitbart News recently reported that the Department of Justice filed its long-awaited antitrust lawsuit against Google, alleging that the Big Tech Masters of the Universe engaged in anticompetitive practices to preserve its monopoly power and crush competitors to its search and advertising businesses.

Schmidt commented on the antitrust case stating: “I would be careful about these dominance arguments. I just don’t agree with them. Google’s market share is not 100%.”

Breitbart News has reported extensively on how the market dominance of Google has negatively impacted smaller companies, it should also be noted that a company does not have to control 100 percent of a market to be considered a monopoly. Even Standard Oil, one of the most famous antitrust cases in American history, did not hold 100 percent market share in the production of oil.

Schmidt admitted that regulation was a likely threat to tech giants, stating: “The context of social networks serving as amplifiers for idiots and crazy people is not what we intended. Unless the industry gets its act together in a really clever way, there will be regulation.”