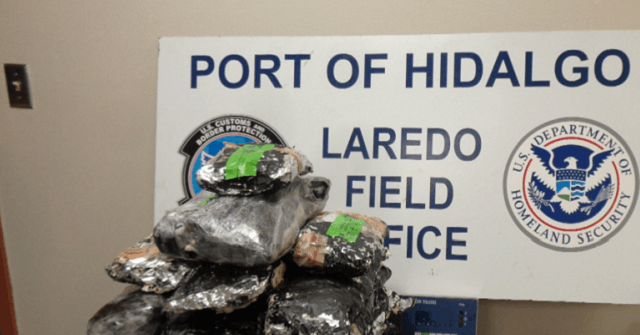 Customs and Border Protection officers in the Laredo and Rio Grande Valley Sector interdicted shipments of methamphetamine and heroin at ports of entry on the Texas-Mexico border. The officers seized more than 200 pounds of the drugs valued at more than $4 million.

Officers assigned to the World Trade Center Bridge on June 11 observed a 2016 Freightliner tractor-trailer approaching for inspection prior to entering the United States from Mexico, according to information obtained from Laredo Sector CBP officials. The officers referred the driver to a secondary inspection station for a check by a K-9 and a non-intrusive imaging system.

Officials estimated the value of the nearly 119 pounds of methamphetamine to be approximately $2,379,204.

The officers seized the shipment and turned the case over to U.S. Immigration and Customs Enforcement’s Homeland Security Investigation agents for further investigation, officials stated.

Elsewhere on the Texas border with Mexico CBP officers seized another $1.7 million in drugs at the Hidalgo International Bridge in the Rio Grande Valley Sector. Officers assigned to the border crossing from Mexico observed a 2019 Mitsubishi Eclipse Cross approaching for entry into the United States from Mexico. A non-intrusive imaging system at a secondary inspection station detected drug packages hidden inside the car.

The officers conducted a physical search of the led to the seizure of 20 packages of methamphetamine and one package of heroin, officials stated. The packages weighed 77.2 pounds and 4.71 pounds respectively. The combined total of the drugs has an estimated street value of more than $1.7 million.

“Our frontline officers’ persistence and perseverance in carrying out CBP’s border security mission is reflected in seizures like this,” Carlos Rodriguez, Port Director, Hidalgo/ Pharr/Anzalduas. “This continued commitment helps protect our communities from dangerous drugs.”

Officers seized the drugs and arrested the 32-year-old woman and her 31-year-old male passenger. Officials report both as being U.S. citizens from Lubbock, Texas.