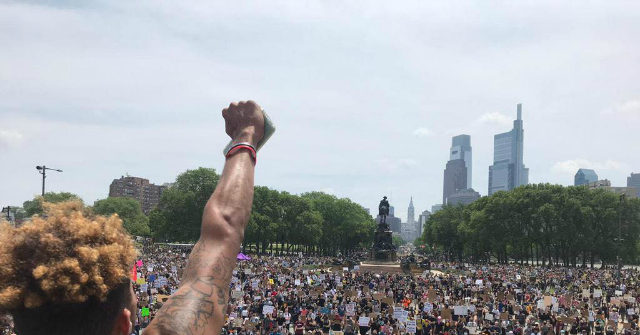 Thousands of George Floyd protesters filled the streets near City Hall in Philadelphia, Pennsylvania, on Saturday during an event led by socialists.

The march, organized by the Party for Socialism and Liberation (PSL), started outside the Art Museum and quickly drew a massive crowd, according to CBS Philly.

An estimated 6,000 people participated in the demonstration, which took place before the citywide 8:00 p.m.-6:00 a.m. curfew took effect.

Thousands of people in Philadelphia continue to protest racism and police brutality following the death of George Floyd. Crowds in Center City stretched from the steps of the Art Museum and past the Cathedral Basilica of Saints Peter and Paul. https://t.co/LlmPCHjz7Q pic.twitter.com/6YJT2DvCW7

Following the march, the PSL said the thousands of protesters took to the streets to demand justice for George Floyd and to bring an end to the “war on Black America,” according to its Facebook page.

We call for the funding of the real needs of our communities and an immediate DEFUNDING AND DEMILITARIZATION OF THE POLICE! We call for Governor Wolf to WITHDRAW THE NATIONAL GUARD! And we call on Commissioner Outlaw to RESIGN after directing the unprovoked brutalization of demonstrators on 6/1! ALL POWER TO THE PEOPLE!

“They never think it can happen until it does. Let them laugh at us. Let them ridicule us. Let them yell, ‘Get a job.’ Let them say whatever they want to say. We are an unstoppable force that will bring this capitalist system to its knees.”

Later, Mayor Jim Kenney shared a photo of himself and a group of protesters kneeling at the Octavius Catto Memorial outside City Hall:

This week has been humbling. It has shown me—someone who considers themselves to be progressive and an ally—that there is a great deal more for me to learn.

Black voices have been silenced for too long. We must hear those voices and act on their demands.
#BlackLivesMatter pic.twitter.com/I3r4JDqm1h

“We are beginning to take action against officers we’ve seen acting inappropriately, and we will continue to do so,” Kenney wrote in a subsequent tweet.

“Excessive force will not be tolerated. We’ll have more to share on our other commitments to address issues of police violence in the near future,” he concluded.