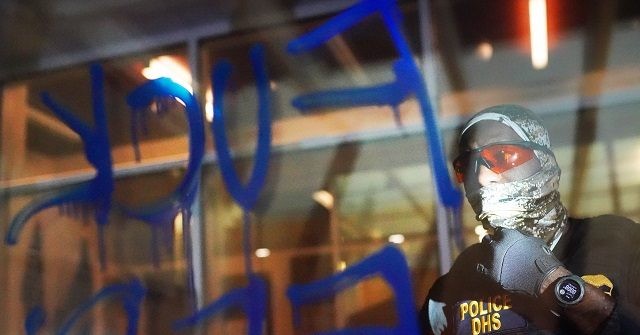 Anti-law enforcement protesters continued their attack on federal agents at the U.S. Immigration and Customs Enforcement building in Portland, Oregon. Protesters threw bottles, rocks, and other projectiles at federal agents and called them “Nazi terrorists.”

In one video tweeted by journalist Andy Ngo, protesters can be heard screaming, “You’re a f-cking Nazi, you piece of sh-t.” Later, someone in the crowd throws a glass bottle at the agents, Ngo reported.

“You’re a f—ing Nazi terrorist!” #Antifa rioters confront federal officers tonight in Portland outside the @ICEgov building. Someone then throws a glass bottle at the officers. #PortlandRiots pic.twitter.com/5GGJIkSlgV

Federal agents made multiple arrests throughout the night to protect the federal facility.

In another incident, someone from an upper floor of a nearby hi-rise residence allegedly threw a bottle at the agents, @KittyLists tweeted.

Someone threw a bottle at DHS officers. Streamer says it came from the balcony above. pic.twitter.com/EQYerKtd9f

Following up on @BridgetChavezTV this morning: DHS says officers made 13 arrests and fired pepper balls at protesters. #fox12Oregon #PortlandProtests https://t.co/ceOFNda3HW