JERUSALEM (AP) — A Palestinian attacker stabbed an Israeli civilian to death Sunday at a busy mall in the West Bank.

The military said the attacker arrived at the mall near a major junction in the southern West Bank, close to the Gush Etzion settlement bloc, and stabbed the civilian before fleeing. 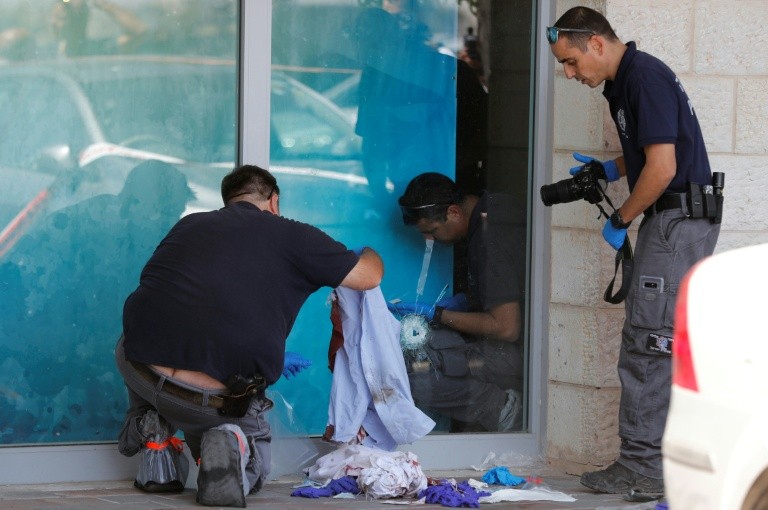 Israeli forensic policemen inspect the site where an Israeli man was fatally stabbed by a Palestinian near a mall at the Gush Etzion junction near Bethlehem in the West Bank on September 16, 2018 (AFP/AHMAD GHARABLI)

Video footage shows other civilians on the scene chasing and shooting the attacker, whom Israeli media identified as a 17-year-old from a nearby Palestinian village. His condition was unclear.

Israeli medical teams arrived to treat the victim, identified as a 40-year-old with multiple stab wounds in the upper body. He was evacuated to a hospital but pronounced dead shortly after.

Israeli civilian stabbed by terrorist while at a mall in the Gush Etzion area, south of Jerusalem. An additional civilian at the scene neutralized the terrorist. Our troops are at the scene. pic.twitter.com/4sekZ6a8EA

Since 2015, Palestinians have killed over 50 Israelis, two visiting Americans and a British tourist in stabbings, shootings and car-ramming attacks.

Israeli forces killed over 260 Palestinians in that period, of which Israel says most were attackers.

The near-daily attacks have since significantly decreased.

This story is developing. More to come…